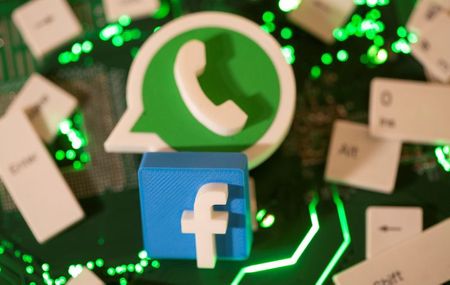 SAO PAULO (Reuters) – Facebook’s WhatsApp messaging service relaunched on Tuesday its transfer money services between individuals in Brazil, after it was blocked by the central bank nearly one year ago, Chief Executive Mark Zuckerberg said in a Tuesday video.

Brazil is the second country where the messaging service launched money transfers. In India, WhatsApp’s biggest market with 400 million users, it got approval to start financial services in November.

By using debit or pre-paid cards numbers, WhatsApp’s 120 million users in Brazil are able to send each other up to 5,000 reais per month through the messaging service free of charge. Initially, the system will not allow each transaction to surpass 1,000 reais or more than 20 transfers per day.

The roll out of the new feature will be phased, Chief Operating Officer Matthew Idema said in an interview. Starting today, a limited and undisclosed number of users will get a payment tool in their app. With that, they will be allowed to invite new users.

In June, WhatsApp had launched its payments services in Brazil, but the central bank suspended it some days later alleging it could damage the country’s existing payments system in terms of competition, efficiency and data privacy.

In addition to reviewing the proposed payments network, the monetary authority also requested the technology giant be labeled as financial services company in Brazil, prompting Facebook to create a new unit called Facebook Pagamentos do Brasil, which is now regulated by the central bank.

But the central bank has not yet greenlit payments with merchants, which is expected to be a paid service, adding a new line of revenue for WhatsApp. Last year, card payments in Brazil totaled 2 trillion reais ($368.12 billion), up 8.2% from 2019.

Idema said talks with the central bank are still ongoing and Facebook expects the launch of merchant payments to occur this year, declining to comment on whether it will be a paid service.

“For WhatsApp launching payments is interesting because it increases the app usage,” the COO said.