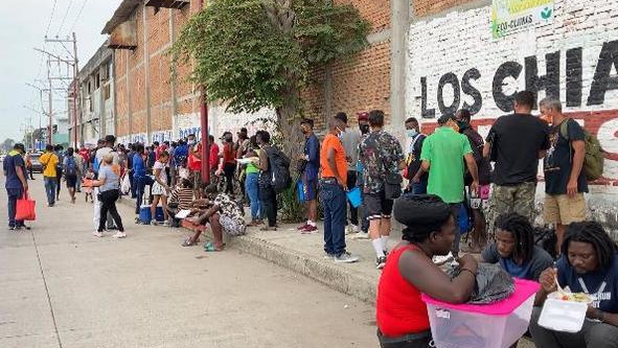 Around one thousand Haitian nationals have been crossing Mexico’s souther border every day, according to reports.

A stunning number of illegal aliens from Haiti entered the state of Chiapas last week via the Suchiate River, which separates Mexico from Guatemala.

“So far this week, on average, about a thousand Haitian migrants have been counted who daily arrive at these offices in Tapachula to resolve their immigration status and stay,” Milenio reported on Friday.

“In other words, as of Thursday, some 4,000 Haitian migrants would have entered through the Chiapas-Guatemala border to request ‘assisted stay’ in our country.”

Thousands of Haitians have flooded the streets of Tapachula seeking food and shelter while also hoping to obtain humanitarian visas from the Mexican government.

“Haitians travel by transport hoping to be lucky not to find immigration checkpoints and arrive from the community of Ciudad Hidalgo to Tapachula, where they seek the request for ‘Refuge, asylum and humanitarian visa’ through the Office of the Mexican Commission for Refugee Aid to later obtain some financial support through social assistance programs from the office of the UN Refugee Agency (UNHCR),” according Milenio.

Local authorities and business owners are concerned the migrants could be creating a “cauldron of Coronavirus infections” due to overcrowding.

Many of the migrants are sleeping in the streets and have even launched businesses selling food and cutting hair, El Heraldo Chiapas reports.

More than 11,000 Haitians had gathered in the city by the end of last week, a local source told Border Report.