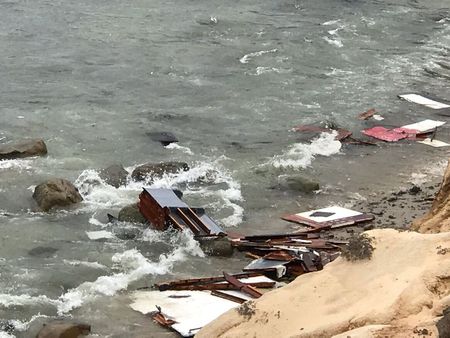 LOS ANGELES (Reuters) – The U.S. Coast Guard on Monday called off its search for more survivors from a boat that capsized off a rocky shoal near San Diego in what authorities said was an ill-fated migrant-smuggling operation that left three dead and five hospitalized.

The 40-foot trawler-style vessel with 32 people aboard overturned and broke apart on Sunday near the Point Loma Tide Pools, part of a federal marine national monument about 20 miles north of the U.S.-Mexico border, authorities said.

Officials on Sunday said four people aboard the boat had perished, but the Coast Guard on Monday revised the death toll downward to three, citing information from the San Diego County Medical Examiner’s office.

Five of the 29 survivors from the wreck were hospitalized, one of them in critical condition, the Coast Guard said in a statement. Several people were rescued from the water, some requiring life-saving medical attention on the beach, authorities said on Sunday.

Officials described the boat as having been overcrowded and lacking sufficient safety equipment.

U.S. Border Patrol agent Jeff Stephenson, who spoke to reporters on Sunday, said the vessel appeared to have been involved in an attempt to smuggle migrants from Mexico into the United States. He said the passengers’ nationalities were not immediately known, but that the vessel’s captain was in custody and speaking with investigators.

“Yesterday, we were once again reminded how dangerous these ocean smuggling attempts can be,” Coast Guard Captain Timothy Barelli said in a statement announcing that the search for survivors had been called off on Monday morning.

Authorities said they had seen a marked increase in maritime human smuggling in recent years. The vessel involved in Sunday’s incident was larger and carried more people than most smuggling boats, according to the Border Patrol.

The deadly wreck occurred two days after police in Houston, Texas, found more than 90 people crammed into a two-story suburban home suspected as being used in a human-smuggling operation for migrants there.