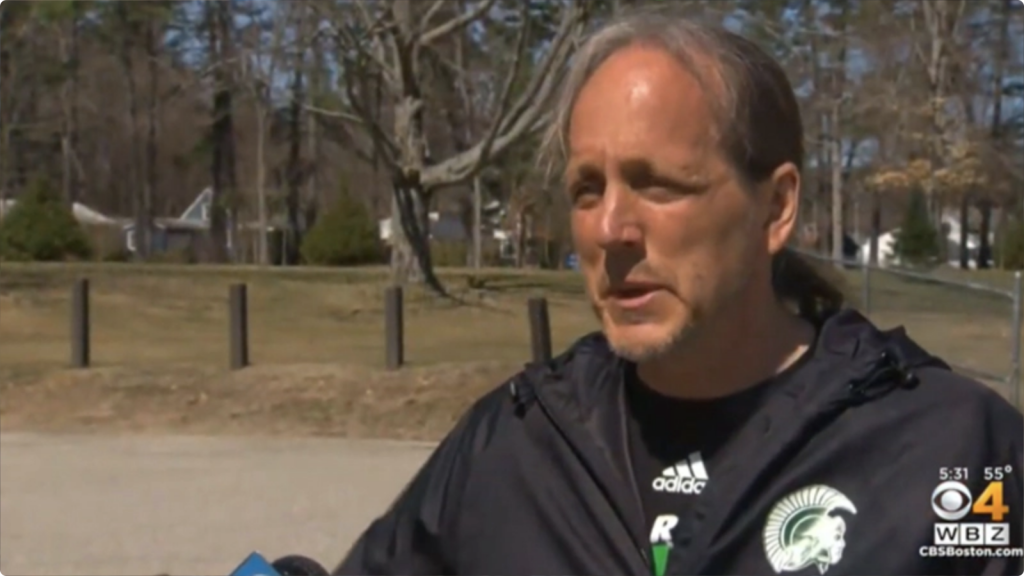 ‘I’ll come straight to the point… I will not put kids on the track and tell them to run any races while wearing masks.’

A high school coach in New Hampshire was fired this week for refusing to force athletes to wear face masks while running outdoors.

“I’ll come straight to the point,” Keyes wrote. “I will not put kids on the track and tell them to run any races while wearing masks.”

Keyes was responding to recommendations put out by the New Hampshire Interscholastic Athletic Association stating, “It is recommended that athletes wear a face covering during competition in all events.”

“No, the real reason I won’t do it is because it’s senseless, irrational, cowardice b——t and I will not help cover that up,” Keyes’ letter stated. “I will not stand up in front of the kids and lie to them and tell them that these masks are doing anything worthwhile out in an open field with wind blowing and the sun shining.”

“Fire me if you must,” Keyes said in a follow-up message. On Monday, Keyes was terminated.

Speaking to NBC10 Boston, the now-fired track and field coach explained he’s against masks for runners because they restrict the essential act of breathing.

“Masks restrict breathing, there’s no question about it, especially think about running full-speed. The wind is in your face, it’s shoving the mask back into your nose and mouth.”

A student interviewed by CBS Boston said Keyes was one of his favorite coaches, adding masks are untenable for runners, especially in hot weather.

In a farewell message left at the Pembroke Academy website, Keyes explained mask rules will be violated by some coaches and obeyed by others, creating an un-level playing field amongst athletes.

I have had a few coaches thank me for speaking out – for saying what they would like to say. Some have even stated that they will be telling their athletes that there’s nothing that can be done if their masks happened to fall down or off at the start of the race. That is how many coaches are going to deal with these new mask rules – they are going to tell their athletes to ignore them, to cheat. We now have some coaches telling athletes to play by some rules and ignore others. Then we’ll have other coaches who tell their athletes that the new mask rules suck but they’ll still need to play by those rules. So now you’ve got an un-level playing field and blatant violation of rules.

The Pembroke Academy superintendent reportedly refused a request for comment from CBS Boston.