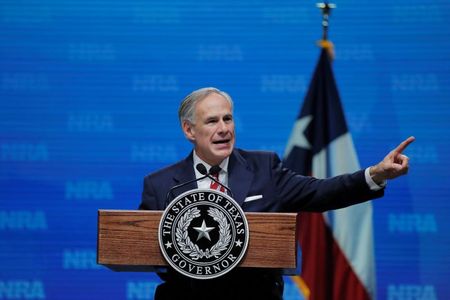 (Reuters) – Texas Governor Greg Abbott issued the most sweeping rollback of coronavirus restrictions of any U.S. state on Tuesday, lifting a mask mandate and saying most businesses may open at full capacity next week.

Abbott’s executive order comes as many U.S. states and major cities seeing a sharp decline in coronavirus infections and hospitalizations begin to ease the unprecedented lockdowns put in place a year ago.

“It is now time to open Texas 100%,” Abbott, a Republican, told a news conference. He said the order would take full effect on March 10.

The order lifts all mask requirements statewide and forbids local authorities from penalizing residents who do not wear a face covering. It removes all restrictions on businesses in counties without a high number of hospitalizations.

Local officials can still apply limits to businesses where hospitalizations remain high, according to the order, but were prohibited from mandating that they operate at less than 50% capacity.

The governor said he was able to lift the restrictions because Texas, the third most-populous U.S. state, had administered nearly 5.7 million vaccine shots to its 29 million residents. See graphic: https://graphics.reuters.com/HEALTH-CORONAVIRUS/USA-TRENDS/dgkvlgkrkpb/

According to Abbott’s office, by the end of March every senior who wants a vaccine would be able to get one.

The decision puts Texas in conflict with U.S. President Joe Biden, a Democrat who has urged Americans to keep taking COVID-19 precautions, including wearing masks, until vaccinations have fully tamped down the virus.

In remarks at the White House on efforts to step up vaccine production, Biden did not mention Texas. But the president appeared to be referring to Abbott’s executive order when he urged Americans to continue wearing face protection.

Referring to Abbott’s order on masks, White House COVID-19 adviser Andy Slavitt told CNN: “I hope the governor rethinks this. It’s only a small piece of cloth that’s needed. I don’t think it affects the economy of the state.”

As of Tuesday, 35 U.S. states, along with the District of Columbia and Puerto Rico, still mandate that residents wear face masks in public. Mississippi also lifted its face-covering order on Tuesday.

More than 51 million Americans, or 15% of the total U.S. population, have been given at least one vaccine dose, according to the Centers for Disease Control and Prevention.

Biden said on Tuesday that through an agreement for Merck & Co Inc to help make rival Johnson & Johnson’s COVID-19 vaccine, his administration had secured enough for every adult in the United States to be inoculated by the end of May.

COVID-19 infections have plummeted in recent weeks across much of the world, including the United States.

According to a Reuters tally, roughly 68,240 new cases have been reported on average each day this week, or 27% of the peak daily average reached on Jan. 7. The United States has recorded 28,681,793 infections and 513,721 coronavirus-related deaths since the pandemic began.

In Chicago, Mayor Lori Lightfoot said that effective immediately, bars, restaurants and other businesses can increase indoor capacity to 50% and remain open until 1 a.m.

“We have made incredible progress in recent weeks and months, and I thank our business community for their ongoing commitment to saving lives,” Lightfoot said in a written statement. 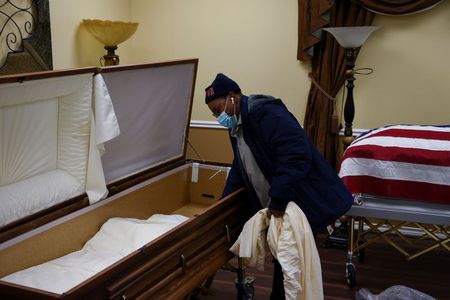 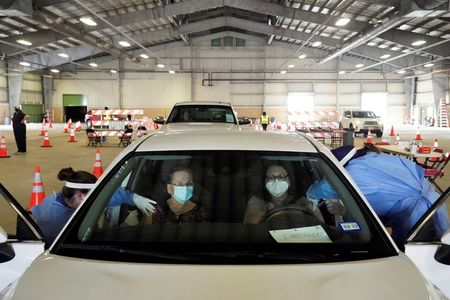