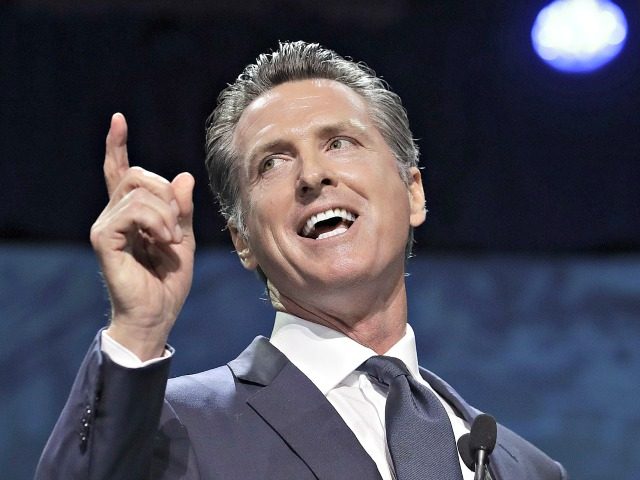 Gov. Gavin Newsom (D-CA) is facing backlash after he posted a video on TikTok telling people how to get vaccinated against the coronavirus while standing inside a restaurant that is off limits to everyone else in the California city of Fresno.

The video shows Newsom and celebrity chef George Lopez, both wearing masks, in an exchange about coronavirus vaccinations.

“How do I find out if I can get a vaccination?” Lopez asks looking into the camera.

Then, Newsom says:
“George you gotta go to myturn.ca.gov.”

“Wonderful to be of service George,” Newsom adds.

The video first appeared on Newsom’s TikTok account but spread to other social media platforms, including Twitter.

Fox News reported on backlash from the video and the response from the governor’s office:

California Gov. Gavin Newsom appeared indoors at a restaurant in a county where indoor dining is not allowed, but the governor’s office has said he did not dine at the restaurant.

He was there to meet with the restaurant’s owners, who received a relief grant, Newsom spokesperson Daniel Lopez told Fox News.

In early November, Newsom was spotted dining at the posh French Laundry in Napa for the birthday of a longtime adviser. Indoor dining was not open to the public in Napa. Newsom earned bitter backlash for the outing, which he later called “a mistake.”

“I need to preach and practice, not just preach,” Newsom said after apologizing for the hypocrisy coming from a governor that has inflicted some of the more severe restrictions in the name of not spreading the coronavirus.

As Breitbart News reported, former acting Director of National Intelligence Richard Grenell took on Newsom, who faces a potential recall, and the D.C. political establishment during a speech at the Conservative Political Action Conference (CPAC) on Saturday.

Grenell has not yet decided if he will challenge Newsom in a potential special election, but his supporters, and those of former President Donald Trump, hope that will happen.