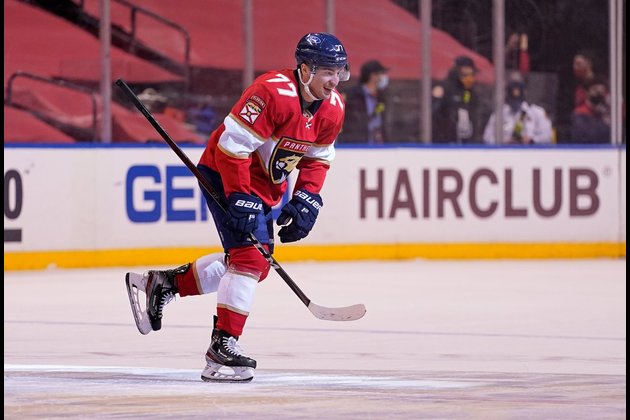 The Florida Panthers, trailing by two goals with less than seven minutes left, got three consecutive tallies to defeat the Dallas Stars 3-2 on Thursday night at Sunrise, Fla.

Stars rookie goalie Jake Oettinger, in just his seventh NHL game, appeared poised to record his first career shutout. However, the Panthers scored three goals in a span of 2:49.

The goals came from Aleksander Barkov, Anton Stralman and Frank Vatrano, with Vatrano notching the game-winner with 3:10 left. Sergei Bobrovsky made 37 saves to earn the victory.

Dallas got goals from Joe Pavelski, his team-high 10th of the season, and Jamie Benn. Oettinger finished with 32 saves.

Pavel Zacha extended his point streak to eight games with two assists and the winning goal in overtime as visiting New Jersey rallied to snap a three-game skid with a victory over Buffalo.

After the Sabres tied the game late in the third, Zacha ripped a successful shot off Jesper Bratt’s pass for the winner just 1:17 into the extra session.

Buffalo played without star forward Jack Eichel, who began the day tied for the team lead with 14 points but was a late scratch because of a lower-body injury. Sabres goalie Linus Ullmark exited after one period due to an apparent injury.

Mike Smith stopped 32 shots for his second shutout of the season, leading Edmonton to a victory at Vancouver.

Smith, 38, improved to 6-0-0 this season. According to STATS, the only older goalie to start a season with at least six consecutive wins was George Hainsworth, who began 8-0-0 for the 1934-35 Toronto Maple Leafs.

Alex Chiasson, Jesse Puljujarvi and Connor McDavid each scored for the Oilers, who earned their fifth consecutive win and improved to 11-2-0 in their past 13 games. The Canucks lost their four game in a row (0-3-1) after falling to Edmonton for the second consecutive game.

Pittsburgh had won four of the first five meetings between the teams this season.

Anthony Beauvillier scored the tiebreaking goal 5:41 into the third period to begin a five-goal flurry by New York, which beat Boston in Uniondale, N.Y.

Jordan Eberle, Jean-Gabriel Pageau, Anders Lee and Oliver Wahlstrom added goals within a six-minute span later in the third for the Islanders, who didn’t score more than four goals in any of their first 18 games this season.

Nick Ritchie scored 1:02 into the first and Craig Smith scored a game-tying goal with 8:24 left in the second for the Bruins.

Blake Wheeler recorded a goal and two assists as Winnipeg earned a victory over visiting Montreal. Down 3-1 midway through the game, the Jets scored five unanswered goals to extend their winning streak to three games.

It was an unsuccessful debut for Dominique Ducharme, who replaced Claude Julien as Montreal’s coach on Wednesday. The Canadiens are 0-2-2 in their past four games and 2-5-2 over their past nine games.

Kyle Connor scored two goals for Winnipeg. Pierre-Luc Dubois and Mark Scheifele each had a goal and an assist, and Nate Thompson scored the game-winner. Joel Armia scored two goals, Tomas Tatar added a goal and Jeff Petry had two assists for Montreal.

Sam Gagner recorded his third career hat trick — his first three goals of the season — and host Detroit pulled away for a victory over Nashville.

Luke Glendening had a goal and an assist and Adam Erne also scored for Detroit. Darren Helm and Bobby Ryan each had two assists, and Red Wings goalie Jonathan Bernier made 37 saves.

Mikael Granlund and Erik Haula scored for the Predators, who won 2-0 at Detroit two nights earlier. Pekka Rinne made 27 saves.

The Flames, who got a goal from Milan Lucic, have just one victory in their past six outings (1-4-1).

Yanni Gourde scored the tiebreaking goal 6:22 into the third period, and Tampa Bay beat visiting Carolina to post its third straight win. The contest concluded a four-game set between the teams.

Brett Pesce had a goal for the Hurricanes, who scored just once in the final two games of the series. James Reimer stopped 19 of 21 shots for Carolina.

Malcolm Subban made 26 saves in the second shutout of his NHL career as visiting Chicago beat Columbus. The Blackhawks improved to 9-2-1 in their past 12 games.

Patrick Kane scored at 8:45 of the third period, the 399th tally of his career. Carl Soderberg scored an empty-netter with 50 seconds left.

Joonas Korpisalo made 25 saves for the Blue Jackets, who have lost three in a row for the first time this season.