Jeriah Horne guides Colorado to victory over No. 19 USC 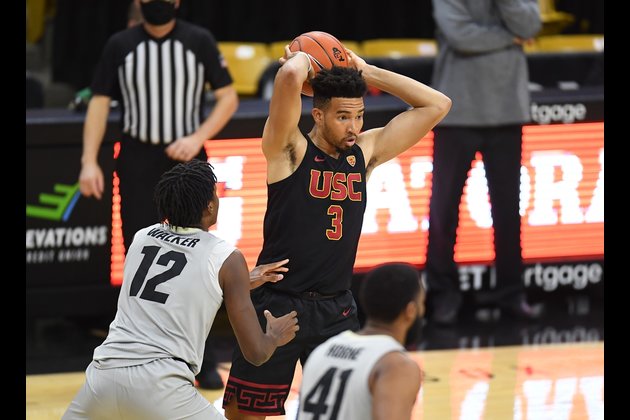 Jeriah Horne came off the bench to score 24 points and grab 11 rebounds, leading Colorado to an 80-62 win over No. 19 Southern California on Thursday night in Boulder, Colo.

In a matchup of the two Pac-12 teams with favorable chances to make the NCAA Tournament field, Horne had a night to remember. He made 9 of 12 field-goal attempts, including 6 of 9 from 3-point range, to help Colorado stay in control for almost the entire game.

The Buffaloes (18-7, 12-6 Pac-12) kept the Trojans from taking another step toward clinching the conference regular-season title. Colorado swept the two meetings between the teams this season, having won 72-62 in Los Angeles on Dec. 31.

Tahj Eaddy and Evan Mobley scored 13 points each to led the Trojans (19-5, 13-4), who lost for the second time in three games. USC made just 38.3 percent of its shots from the floor and sank one fewer 3-pointer as a team then Horne did by himself.

Colorado closed out the first half on a 10-1 run to take a 42-29 advantage into halftime. Horne and Jabari Walker knocked down 3-pointers during that stretch.

USC got the deficit down to 10 with 4:22 to play on Ethan Anderson’s basket before the Buffaloes pulled away.

Colorado’s bench outscored USC’s 37-18 thanks in large part to Horne. The Buffaloes also had 20 assists to seven for USC, and Colorado scored 17 points off turnovers compared to three for the Trojans.