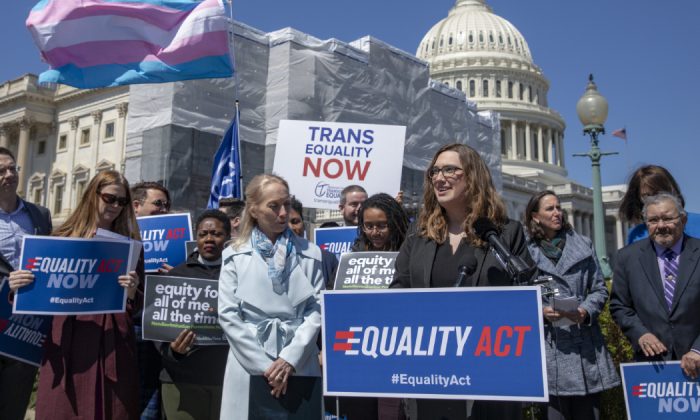 A coalition of conservative groups is asking parents and lawmakers to join a movement that seeks to take gender identity and sexual orientation politics out of a child’s upbringing.

The “Promise to America’s Children” initiative seeks to protect children and parents who wish to subscribe to traditional or religious views of gender, sexuality, abortion, and life from being coerced to comply with government policies that penalize them for not doing so. It was launched by The Heritage Foundation, Family Policy Alliance, and Alliance Defending Freedom.

It comes as Congress members push for the passage of the Equality Act, which seeks to prohibit “discrimination on the basis of sex, gender identity, and sexual orientation, and for other purposes.” The bill was again introduced in Congress on Feb. 18 after failing to pass in 2019 when then-Senate Majority Leader Mitch McConnell (R-Ky.) refused to consider the law.

President Joe Biden has vowed to enact the Equality Act during his first 100 days as president. It also seeks to classify “sexual orientation” and “gender identity” as protected classes under federal law, while expanding protections for LGBTQ individuals in public spaces and services.

The Heritage Foundation previously argued that the bill would likely cause harm to employers and workers by threatening them with penalties if they do not conform with the new sexual norms; medical professionals if they refuse to pay for these therapies against any moral or medical objections; parents and children by attempting to normalize hormonal and surgical interventions for gender dysphoric children and forcing ideological “education” in schools; women by closing down sex-specific facilities and services and sports; and non-profits and volunteers by forcing some faith-based organizations to conform with sexual norms or shut down.

Tom Farr, president of the Religious Freedom Institute, previously told The Epoch Times that he believes if the law passes, it would “create a cause of action against any institution that rejects the government-imposed moral orthodoxy, including churches, hospitals, adoption agencies, religious orders, schools, and other nonprofits.”

“Dissenters will be driven from public life with ruinous fines and social opprobrium. Free exercise equality will not be allowed to guard against the harms of the Equality Act because it precludes the Religious Freedom Restoration Act as a defense against adverse action based on one of its provisions,” he added.

The groups are asking parents and policymakers to sign a 10-point pledge to oppose legislation that forces children to adopt sexual norms prescribed by the government and to help develop laws that would “protect children’s health, safety, and families.”

“Our world is perilous for children,” Autumn Leva, vice president for strategy at the Family Policy Alliance, said in a statement.

“In media and at school, children are routinely exposed to explicit messages and images. Boys are allowed to play in girls’ sports, shattering girls’ opportunities and dreams. When children are struggling to embrace their biological sex, they are pushed to pursue dangerous cross-sex hormones and sterilizing surgery. And the Equality Act—which the U.S. House is poised to vote on this week—would use the full power of federal government to enshrine these practices nationwide.”

Other objectives of the pledge include protecting children from exposure to pornography, explicit content, and promotion of abortion and gender ideology in the classroom; supporting children’s ability to pursue counseling that affirms their biological sex; protecting children in sex-specific areas such as showers and locker rooms; upholding girls’ opportunity to compete in their own sports divisions; and affirming parental rights, including at school.

At least two dozen state legislators have signed the pledge, according to the movement’s website.

On Biden’s first day in office, he signed an executive order seeking to address discrimination on the basis of gender identity and sexual orientation. The text of the order augurs measures that would expand transgender access in areas such as the locker room and school sports, but fails to mention protections on the grounds of religious belief.

His action earned him praise from civil rights activists and LGBTQ groups but was condemned by religious liberty advocates and the United States Conference of Catholic Bishops, which characterized the executive order as a “misguided approach” to address discrimination.

The White House did not immediately respond to The Epoch Times’ request for comment.