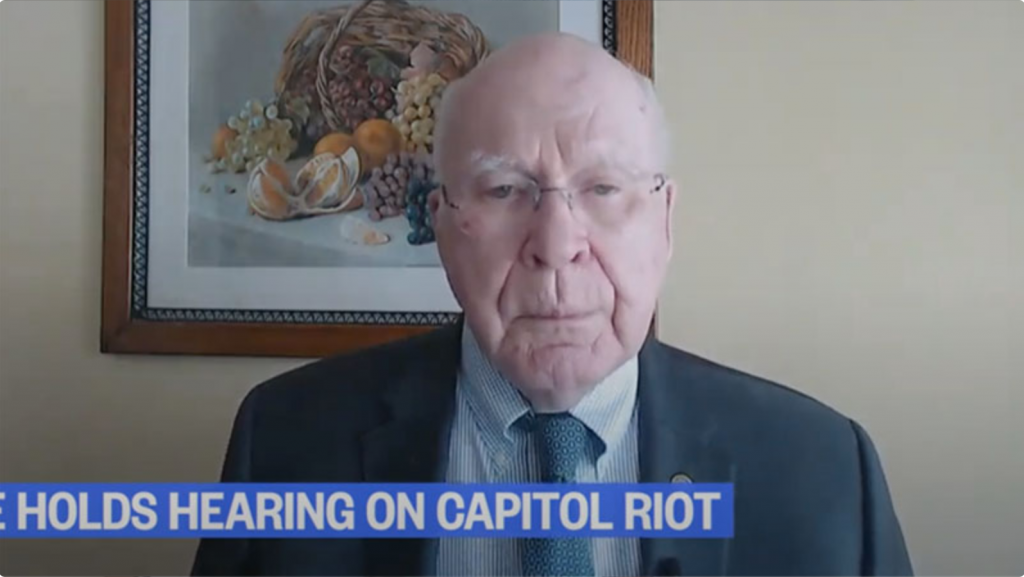 Democrat Senator Patrick Leahy (Vt.) let slip a startling revelation during a Congressional hearing over the Capitol riot: the military occupation of Washington D.C. will continue until Democrats can “root out the hate” — a leftist euphemism for curtailing the First and Second Amendments.

During the Senate Homeland Security and Rules Committee on Tuesday, Leahy first pointed out to former chief of Capitol police Steven Sund – who had claimed that D.C. Police lacked the resources to prevent the riot – that he drafted a critical intelligence report showing that leftist groups like Antifa had been planning for months to riot at the Capitol.

“You said there wasn’t enough intelligence shared, but in your same letter you stated the intelligence assessment, ‘indicated that members of the Proud Boys, white supremacist groups, Antifa and other extremist groups are expected to participate in the January 6th event, and may be inclined to become violent,’” Leahy said.

And though the military is slated to remain in D.C. until March 8 with Trump’s impeachment trial as the excuse, Leahy let slip that the National Guard occupation of the nation’s capital actually wouldn’t be lifted until Democrats “root out the hate” he says led to the Capitol riot.

“I think until we root out the hate that drove the rioters through the doors that day, no fence or tank or barrier is going to provide the safety we need,” Leahy said.

Democrats and their Big Tech allies routinely use the term “hate” to justify their attacks against the First and Second Amendments.

For example, House Democrats recently sent a letter to several cable providers meant to intimidate them into dropping conservative channels like Fox News and OAN for “misinformation” that leads to “real world harm.”

“Misinformation on TV has led to our current polluted information environment that radicalizes individuals to commit seditious acts and rejects public health best practices, among other issues in our public discourse,” they wrote.

Chairman Joe Biden also recently announced a gun control push, calling for restricting firearm sales to Americans and confiscating guns from individuals the government decides is prohibited from owning them.

Currently, there are 6,000 National Guard troops in D.C, and the Department of Defense stated that they will remain there until mid-March, with the total cost of the operation believed to be $483 million.