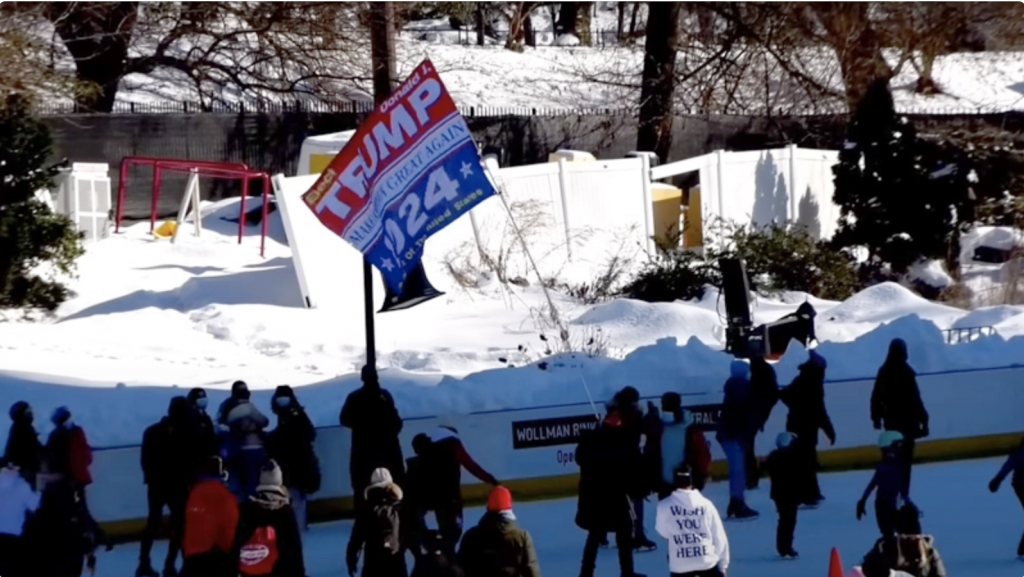 Footage out of New York City captured the moment a pro-Trump political activist was attacked by security for flying a large Trump flag at a skating rink operated by the president’s organization.

Video shows security guards for the Wollman Skating Rink in Central Park approaching a man wearing a Trump hat and waving the flag.

As the man is told to leave, one overzealous security guard pushes him before tackling him onto the ice, at which point two teens make off with the flag.

The Trump supporter behind the stunt, named Dion Cini, refers to himself as a “guerilla marketer.”

In this instance, Cini was bringing attention to the fact that the Trump Organization’s contract with NYC to run the skating rink is being terminated.

“I brought the Trump 2024 flag to Trump Wollman rink because it was the last day of The Trump organization managing the rink, which they’ve done for the last 30 some years, and wanted to celebrate another Trump accomplishment while also starting a campaign push for 2024,” Cini said. “As I was being attacked, I heard people cheering as I was put into a chokehold, which shocked me because I thought they want unity and not watch their fellow Americans being [attacked] over a flag.”

However, after outcry, the city reversed its decision and will terminate the contracts after the winter season is over.

Upon hearing the rink will remain open, Cini announced he’ll be making his presence felt again in the near future.

Not only did the Trump Organization manage the rinks, but Donald was directly responsible for the city opening the Wollman rink in 1986.

Cini has been advertising his support for Trump for years now, as Infowars covered in 2019, he was kicked out of Disneyland for displaying a massive “Trump 2020” banner.

Watch below as Cini joins Greg Kelly Reports to discuss the incident.