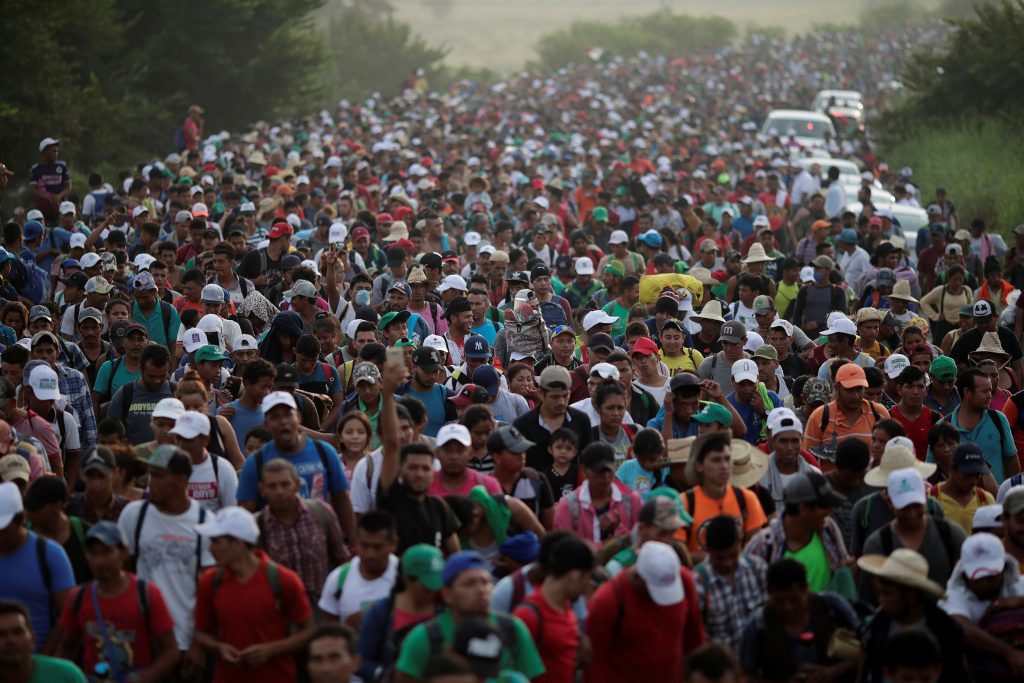 The U.S. southern border is being swarmed by an “avalanche” of illegal aliens just weeks into the Biden administration, according to reports.

Over 3,000 migrants are being apprehended every day, while thousands more are reaching U.S. soil without detection.

“We’re already being overwhelmed. We literally have so many people coming across that we don’t have enough agents to catch them,” a Border Patrol official told the Center for Immigration Studies. “They’re just bum-rushing the border. Probably three-quarters of them are probably getting away.”

“It’s like each station is only allotted a certain number of agents hired and, even if we had the maximum, it’s not enough to stop the groups.”

The official says migrants have become emboldened to engage in physical confrontations as they gain the upper hand through sheer numbers.

“Someone must be spreading the word to be able to fight with agents. They’re getting much more brazen and assaultive,” the agent explained. “They know we’re overwhelmed and the word has gotten out.”

“As long as they send a giant amount of people out they’ll get through. We see it every day. We’re seeing vehicles on the [Mexico] side like cattle trucks, high-backed, deuce-and-a-half trucks just racing down the road dropping people off in different areas, and they’re like, ‘Go!’”

Activists working in shelters in Mexico are raising alarms about the “avalanche” of migrants from around the world making their way towards the U.S.

“The situation could get out of control. We need a dialogue with all of the authorities before this becomes chaos,” said Gabriel Romero, a priest who operates a shelter in southern Mexico.

Current trends indicate over a million migrants could reach the U.S. border this year – on record.

FROM THE CENTER FOR IMMIGRATION STUDIES:

AUSTIN, Texas — The next caravan predicted last week may not materialize amid a fresh promise by Mexico — after a furtive diplomatic pressure campaign by the Biden administration — that its troops would not allow it to pass.

Through its official Twitter account, the Mexican embassy in Guatemala this week let the caravan organizers know that: “Mexico does not promote, nor will it allow the irregular entry of caravans of migrants into the national territory.”

But despite significant Mexican counter-migration operations on behalf of the new U.S. administration, large numbers of migrants from around the world are still flowing into northern cities and towns along the border from Texas to California, powered by adrenaline from recent Biden moves to open the border wide, according to a CIS survey of Mexican media reporting.

They’re traveling instead to and through Mexico in small, discreet groups aided by smugglers as an alternative to the massive noisy caravans that Guatemala and Mexico have been forcefully breaking up over the past year under President Trump and now on behalf of the Biden administration for, as Reuters reported, “political expediency”.

In Tijuana, large numbers of aspiring immigrant border-crossers are arriving in small groups to take advantage of what they perceive as a soon-to-open border under Biden, which the media outlet Telemundo describes as a new “migratory phenomenon”.

“They are doing it not in a caravan, but in groups, in families,” Javier Algorri, undersecretary of immigration affairs for Baja State, told Telemundo on February 18. Back in Honduras, the media outlet quoted Juan Espinal in the town of Aramecina explaining that government disruptions of earlier caravans have him preparing for a journey north in a small group next month.

“I think it will be a small group. So one more can be mobilized better,” he said (in my rough translation). “Right now, just me and my daughter and maybe a friend.”

In Piedras Negras, just across from Eagle Pass, Texas, there have been an average of 200 migrants a day for the past year, a number that has sharply increased since mid-January, coinciding with the Biden inauguration, Vanguardia reports. “The situation becomes much more complex, since the migratory flow continues despite the restrictions on the border,” the newspaper quoted city official Hector Gerardo Menchaca Gonzalez.

The Tampico newspaper Milenio, in a February 6 dispatch, reported that so many groups of Haitians were arriving in Reynosa, Mexico — across the border from McAllen, Texas — on hopes that President Biden would let them in that shelters already filled to capacity were turning them away.

“According to those responsible for the shelter, this could be the beginning of a new humanitarian crisis for the borders,” the newspaper reported.

More than 60 percent of migrants in the northern Mexico city came from Africa and showed up in October, November, December, and January, according to local Mexican news reports like this and this.

“The arrival of Joe Biden to power, with his promise to regularize the situation of millions of migrants, has sown hope in many people, making the formation of new caravans even more likely,” according to the Debate news website in Mexico.

The newspaper Semana described the timing of travel decisions right now in this way:

Migrants do not lose hope of being able to enter the United States in search of new opportunities and, above all, they believe in the words of the new President Biden. Since the Democrat took office as president, he insisted on directing his efforts to dismantle Trump’s anti-immigrant policies.

Untold thousands of migrants from countries of terrorism concern and from elsewhere around the world were dammed up behind Panama and Costa Rica border closures in place to contain the spread of Covid-19.

But now, as CIS predicted in a December 18 posting, Panama has reopened its borders north with Costa Rica, which plans to reopen its borders next month, unleashing a torrent of migrants through Mexico. Migrants who typically pass through these countries have flown into South America from the Middle East, South Asia, North Africa, sub-Saharan Africa, and many other areas.

A February 18 Associated Press dispatch by Isabel Mateos and Maria Verza reports alarming increases in migrant numbers trekking through Mexico from South America in “small, discreet groups”. Their story, datelined from Tenosique, Mexico, in Tabasco state, quoted the priest who runs a local migrant shelter as saying 1,500 migrants have flowed through in just the first six weeks of 2021, compared to 3,000 for all of 2020.

“We have a tremendous flow and there isn’t capacity,” Gabriel Romero told the AP. “The situation could get out of control. We need a dialogue with all of the authorities before this becomes chaos.”

The same story also quoted a nun, Isabel Chavez, who works in a migrant shelter in the southern Mexican city of Palenque that an “avalanche” of migrants who arrived in January forced the shelter to reduce the number of days migrants could stay to a maximum of two.

The AP predicted the flow could return to the high levels seen in late 2018 and early 2019.

“The flow is increasing and the problem is there’s less capacity than before to meet their needs” because of the pandemic, the AP quoted Sergio Martin, head of Doctors Without Borders in Mexico.

The main reason for all of this, now?

“Some migrants have expressed hope of a friendlier reception from the new U.S. administration, or started moving when some borders were reopened,” the AP reported.

The same story also noted that the new Biden administration is aware “that the more hopeful message could set off a rush for the border and says it will take time to implement new policies.”

Indeed, the Biden administration has messaged the migrants not to come right now, saying that it wants “orderly migration”. Mexico has agreed to do what it can to oblige, to little apparent effect.

Mexico’s immigration service said it had conducted 50 raids on freight train lines since January 25 in southern and central Mexico, detaining 1,200 migrants. On February 15, Mexican authorities found 233 migrants in a cargo truck in Veracruz near the Guatemalan border. A day earlier, the Mexican national guard caught more than 100 migrants in a tractor trailer in Nuevo Leon.

When 40 Haitian migrants tried to cross the Rio Grande from Acuna to Del Rio, the Mexican army and national guard intervened. Only 15 of the Haitians reached the Texas side, according to El Financiero.

Apprehensions Spiking on the U.S. Side, Up 100 Percent Since Inauguration

But migrants powered forward by the new president’s promises of looser borders are not waiting for policy implementation, apparently. They appear to be massing on Mexico’s northern border, and many are already breaching through in numbers approaching the crisis levels of 2018-2019.

U.S. authorities encountered nearly 78,323 migrants along the border with Mexico just in January, the highest number for that month in a decade and more than double the number from a year earlier, the Washington Post reported recently. The figure represents an increase of 114 percent when compared to arrests recorded in January 2020, when the Border Patrol apprehended 36,585 people.

The Border Patrol is averaging 3,000 apprehensions a day, also up double-digit percentages from a year earlier, and that number does not reflect the “got-aways”.

On the ground in West Texas, a Border Patrol agent told CIS what the got-away situation looks like and how accurately the number may be recorded:

We’re already being overwhelmed. We literally have so many people coming across that we don’t have enough agents to catch them. They’re just bum-rushing the border. Probably three-quarters of them are probably getting away. It’s like each station is only allotted a certain number of agents hired and, even if we had the maximum, it’s not enough to stop the groups. On the mike side [jargon for Mexico], they’re getting bolder. Someone must be spreading the word to be able to fight with agents. They’re getting much more brazen and assaultive. They know we’re overwhelmed and the word has gotten out. As long as they send a giant amount of people out they’ll get through. We see it every day. We’re seeing vehicles on the mike side like cattle trucks, high-backed duce-and-a-half trucks just racing down the road dropping people off in different areas and they’re like, “go!”

The AP story referenced earlier in this blog quoted Honduran migrant Edilberto Aguilar, as he walked north, characterizing the situation:

“One day we arrive and tomorrow others arrive. This never ends.”