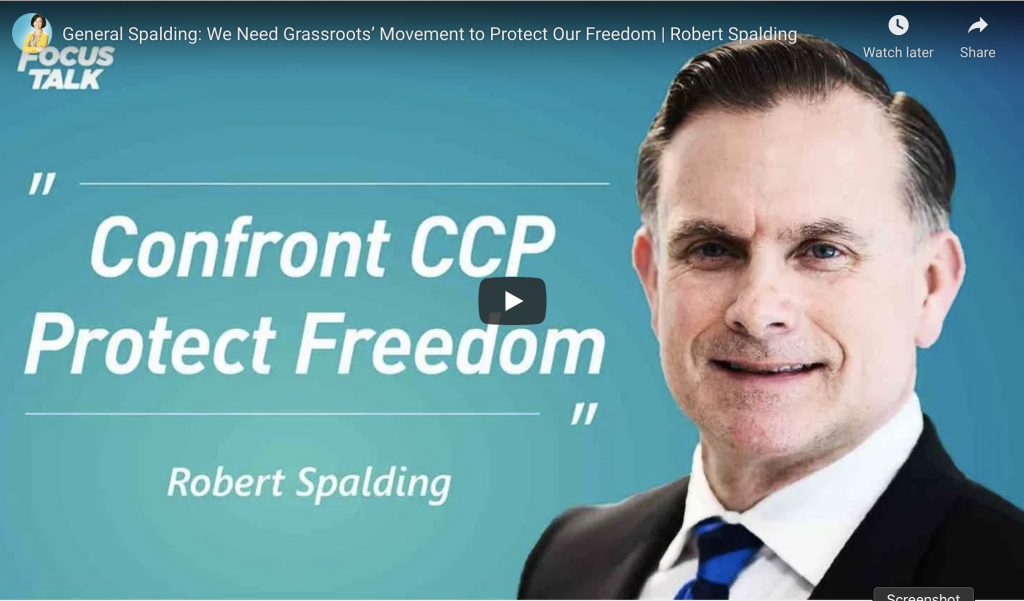 The Chinese Communist Party (CCP) manages the narrative that it represents the people of China and the nation, but in fact, it only functions for a few leaders within the regime, said General Spalding, a former senior strategist in the Trump administration’s National Security Council, and retired Air Brigadier General.

Spalding gave his insight into the CCP’s operations and influence in an interview with NTD’s “Focus Talk.”

Spalding is also a leading expert on China and the author of “Stealth War: How China Took Over While America’s Elite Slept.”

The expert on China said in the interview that President Joe Biden repeated the CCP narrative in a recent speech at the CNN Town Hall.

He also mentioned that under the Trump administration, Americans were able to see what the CCP really was, and people on both sides have woken up.

“President Biden was repeating essentially the narrative that the Chinese Communist Party has created about China. And that is whatever the Chinese Communist Party says about China is really the reality when in truth, they have created this narrative to serve or to, to basically serve their own ends,” Spalding said in regards to the controversial speech about the Chinese “cultural norms” applied to Uyghur concentration camps.

The NTD host started off by asking him about his realization of the increasingly apparent transgressions of the CCP.

“Well, it’s very interesting because I lived in China from 2002 to 2004. I didn’t know anything about the government or the party. I got to know the people I traveled the country, I spoke the language. It was really a wonderful experience,” Spalding said.

He wanted to go back and hadn’t realized from his visit what the CCP was until he became involved with U.S. national security.

“It wasn’t until later when I was involved in China foreign policy and national security policy, that I began to understand what the government was, and more particularly what the Chinese Communist Party was,” he said.

“And it was then about 2014 as I was at the Pentagon advising the Chairman of the Joint Chiefs on China that I began to change my view with regard to China.”

Spalding noted that China had changed from his first visit a lot in comparison to 2016, when he revisited the country. In the early 2000s, China was much more open when it had just entered the WTO (World Trade Organization).

“Of course, the things that the Chinese Communist Party does to the people is really hidden from our outsider’s view. But when I went back in 2016, it was a fundamentally different country, far tighter in terms of the repression of the government. People did not seem as enthused or happy,” Spalding said.

“They even had guards at the subway with automatic weapons, which really seemed odd to me.”

The host asked Spalding if he noted any changes in China at the time of the publication of his book “Stealth War” in late 2019.

“It seemed that the Trump administration was beginning to create challenges for the Chinese Communist Party in terms of its influence over the American people,” Spalding stated.

He further explained how the CCP virus, which causes the COVID-19 disease, actually gave China an upper hand to reverse the confrontation of the Trump administration in various areas, in particular, the medical field.

“But since the coronavirus, you’ve seen a reversal of that. And I think that the Chinese Communist Party has actually accelerated its ability to influence societies through of all things, the medical profession. So I was surprised at how, how pervasive the influence of the Chinese Communist Party was in medical institutions like the World Health Organization, and our own Center for Disease Control, and the pharmaceutical industry. So it really was a shock to me how they were able to really change and really influence policy with regard to the Coronavirus all over the world. In spite of the fact that in Taiwan, they had a completely different approach to the virus, and no free society, even given the fact that Taiwan is a democracy, followed them.”

The host then inquired about the reasons that allow for the CCP to be able to infiltrate so deep in the United States.

“Well, it’s really good, you know, understanding of how humans interact, that really helps us understand the power of the Chinese Communist Party. Humans are responsive to greed and fear. And the Chinese Communist Party uses both they use it to influence our decisions. And in fact, they use greed to influence nearly every institution in the West, whether they be our domestic institutions like academia, like the political system, like our corporate enterprises, like our financial enterprises, or internationally, like the United Nations of the World Trade Organization or World Health Organization,” Spalding said.

“And the way they do that is by provide providing some kind of financial incentive, or deal that in that, that brings in those elites of those institutions in ways that sometimes are very imperceptible, it may be a family member, it may be through an investment. It happens in so many ways. There is graph there is straight bribery, but for the most part, it’s the Chinese Communist Party finding ways to help enrich the elites and free societies that really unlocks their loyalty with regard to the coronavirus,” he said.

General Spalding concluded by saying that if Americans are able to thrive through seeking political reform starting at the grassroots level and then moving into the state and federal levels,—if the reforms can be successful—they would create challenges to the idea that the Chinese model is suitable to emulate, and America would become a beacon for the world about what government system would be appropriate.