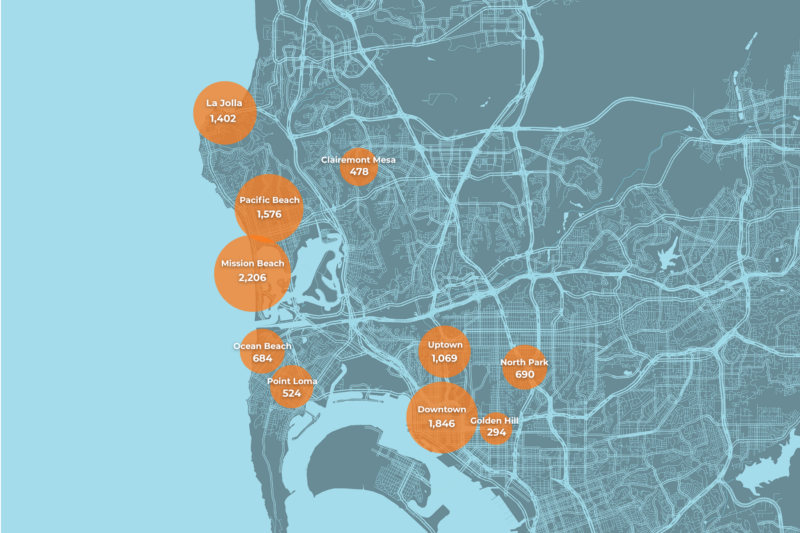 As City Council President Jen Campbell and stakeholders on both sides of the vacation rental saga prepare to debate yet another regulation proposal, they’re grappling with an inconvenient truth: No one knows exactly how many vacation rentals there are in the city.

Campbell has predicted her plan could slash the number of whole-home rentals in the city by at least two-thirds. But new data obtained separately by Voice of San Diego and the city’s Office of the Independent Budget Analyst suggests Campbell’s proposal may not reduce the number of whole-home vacation rentals as much as she predicts. The new numbers also offer a window into an industry affected by a pandemic that has decimated San Diego’s tourism industry.

On Tuesday, Campbell will urge City Council members to approve a compromise she brokered with labor groups and a vacation rental platform that caps the whole-home rentals at 1 percent of the city’s housing stock, and creates a licensing process and a bolstered enforcement system that allows the city to issue fines and revoke licenses. The proposal includes a carveout for Mission Beach, a longtime vacation rental mecca, allowing whole-home rental licenses for the equivalent of 30 percent of the neighborhood’s housing.

Campbell’s office, relying on a past city auditor’s report, estimates the city has about 16,000 vacation rentals. By comparison, the city reports that just 6,829 vacation rentals were registered to pay hotel taxes to the city as of last week, a number that does not include many rental operators whose tax bills are handled by rental platforms.

Venus Molina, Campbell’s chief of staff, argues the data discrepancies are yet another reason the city should proceed with regulations.

“The importance of establishing this ordinance is to create that baseline to actually gather the data that we need to actually know how many are out there,” Molina said.

Republican Chris Cate, who has pushed past regulatory proposals of his own, agreed.

“Until we actually have a permit system, the numbers are gonna be all over the place,” Cate said. “Everyone’s gonna have assumptions or estimates.”

Campbell’s team hasn’t attempted to guess how many whole-home rentals there could be in the city, but the Council president’s policy pitch would allow the city to hand out about 5,400 whole-home rental licenses, a figure based on the 540,022 housing units in the city, to operators who want to host guests more than 20 days a year. It would also provide an unlimited number of licenses for home-sharing operations, where the homeowner remains on site, and for both whole-home and home-sharing hosts who welcome guests fewer than 20 days a year. Permitting costs are yet to be determined, and the amounts set could also influence hosts’ decisions about whether to continue renting out their spaces.

The first data set obtained by VOSD comes from Granicus, formerly known as Host Compliance, which the city once paid to help it track down rental operators who weren’t paying hotel taxes.

Granicus scraped about 50 websites where vacation rentals are advertised and found 16,361 listings in the city as of mid-January. Of those, 81 percent were for whole-home rentals. After accounting for listings featured on multiple sites, Granicus found 13,919 unique rentals, a number that includes both entire homes and home-sharing. Here’s a breakdown of the top neighborhoods in the city where rentals are located compared with the number of rentals for those same top neighborhoods in 2017, when the company last provided data to VOSD.

The latest data from Granicus shows the number of listed vacation rentals has grown since 2017 – from an estimated 11,347 unique rentals in December 2017 to more than 13,900 last month – but the data set the company provided to VOSD didn’t indicate how often those listed rentals have been rented out recently, or how many whole homes were tallied after listings on multiple sites were eliminated.

The independent budget analyst’s office sought to get a handle on the volume of hosts who rent out their homes less often to gauge the impact Campbell’s proposal would have on both the rental industry and city hotel-tax hauls.

Budget analysts analyzed 2019 data from Inside Airbnb, a website that tracks Airbnb listings, and conferred with the city treasurer’s office on hotel-tax collections.

Analysts Baku Patel and Jeff Kawar noted in their report released Friday that vacation rental platforms and other sources haven’t shared data showing how often rentals are booked and what percentage of them are booked more or less than 20 days annually, a key trigger in Campbell’s ordinance. Patel said the budget analysts ran models estimating 15 percent to 25 percent of rentals were rented out fewer than 20 days a year and spoke with industry experts who confirmed this range was sound.

Based on their assumptions about rentals booked fewer than 20 days a year and the number of available permits under Campbell’s proposal, Patel and Kawar estimated the city might lose 1,651 to 2,781 whole-home vacation rental listings, numbers that would represent the equivalent of a 15 percent to 25 percent drop in whole-home listings. That’s less than the two-thirds drop Campbell has claimed would follow if her proposal goes into effect.

The budget analysts also estimated that decrease would bring with it a 14 percent to 23 percent drop in hotel-tax revenue.

In 2019, the city pulled in $31.5 million in hotel-tax revenues from vacation rentals. Patel and Kawar estimated a $4.4 million to $7.3 million drop in hotel-tax collections had Campbell’s ordinance been in effect but noted that the pandemic could lessen the immediate budget loss given the continued drag on tourism.

Data provided to VOSD by AirDNA, an analytics firm focused on short-term rentals, reveals how the pandemic has impacted the industry in San Diego – and how bookings shifted by month even before the health crisis.

AirDNA data shows vacation rental listings on platforms Airbnb and VRBO were down 28 percent this January compared with January 2020. The number of listings with at least one booking in January also fell 39 percent – from 9,360 in January 2020 to 5,718 last month.

Here’s a look at how the number of active vacation rentals has fluctuated since 2019 and during the pandemic.

AirDNA spokeswoman Kristina Sprindyte and Jonah Mechanic, whose San Diego company manages vacation rentals and has years advocated for rental operators, said some percentage of rentals has temporarily come off the market as some hosts choose to use them in different ways during the pandemic.

For example, Mechanic said some hosts who live outside San Diego most of the year opted to stay in their second homes during the pandemic as work and school moved online, or have rented out for weeks or months rather than for the shorter trips that were far more common in the past. Some of these homes remain listed on rental sites.

Mechanic said he is hopeful that Campbell’s proposal will pass and give the vacation rental industry more certainty as the economy rebuilds.

He believes the ordinance is also necessary to help the city accurately assess the number and types of vacation rentals it has. Absent that information, Mechanic said, the impact of the regulations won’t be entirely clear until after they are implemented.

“I don’t think anyone is going to be able to give hard numbers until the dust finally settles on this,” Mechanic said.