Merrick Garland: Portland Riots May Not Be ‘Domestic Terrorism’ Because Courthouse Was Closed 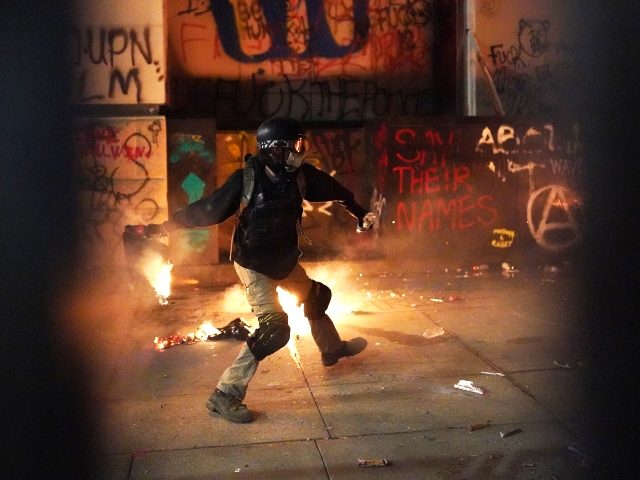 Judge Merrick Garland told the Senate Judiciary Committee on Monday that Antifa’s attacks on the U.S. courthouse in Portland last year may not have been “domestic terrorism,” because unlike the Capitol riot, they took place at night when the court was not “in operation.”

Garland, who is President Joe Biden’s nominee for U.S. Attorney General, was questioned at his confirmation hearing by Sen. Josh Hawley (R-MO):

Judge Garland: Well, Senator, my own definition, which is about the same as the statutory definition, is the use of violence or threats of violence in attempt to disrupt the democratic processes. So an attack on a courthouse, while in operation, trying to prevent judges from actually deciding cases, that plainly is domestic extremism, domestic terrorism. An attack simply on a government property at night, or any other kind of circumstances, is a clear crime and a serious one, and should be punished. I don’t know enough about the facts of the example you’re talking about. But that’s where I draw the line. One is — both are criminal, but one is a core attack on our democratic institutions.

Behind the veil of “protests,” highly organized violent operators have carried out direct attacks on federal personnel and property, particularly the federal courthouse in Portland. Shielded by the crowds, which make it difficult for law enforcement to detect or reach them, violent opportunists in Portland have attacked the courthouse and federal officers with explosives, lasers, projectiles, and other dangerous devices. In some cases, purported “journalists” or “legal observers” have provided cover for the violent offenders; in others, individuals wearing supposed press badges have themselves attacked law enforcement or trespassed on federal property. More than 200 federal officers have been injured in Portland alone.

The riots resulted in the front of the courthouse being boarded up; the destruction of security equipment protecting the courthouse; and the breaking of windows in the offices of federal prosecutors.

(5) the term “domestic terrorism” means activities that— (A) involve acts dangerous to human life that are a violation of the criminal laws of the United States or of any State; (B) appear to be intended— (i) to intimidate or coerce a civilian population; (ii) to influence the policy of a government by intimidation or coercion; or (iii) to affect the conduct of a government by mass destruction, assassination, or kidnapping; and (C) occur primarily within the territorial jurisdiction of the United States

Notably, the statute does not confine acts of domestic terrorism to working hours.

Editor’s Note: The headline and body of this article have been updated to more accurately communicate the reasoning behind Garland’s answer.

Joel B. Pollak is Senior Editor-at-Large at Breitbart News and the host of Breitbart News Sunday on Sirius XM Patriot on Sunday evenings from 7 p.m. to 10 p.m. ET (4 p.m. to 7 p.m. PT). He is the author of the recent e-book, Neither Free nor Fair: The 2020 U.S. Presidential Election. His recent book, RED NOVEMBER, tells the story of the 2020 Democratic presidential primary from a conservative perspective. He is a winner of the 2018 Robert Novak Journalism Alumni Fellowship. Follow him on Twitter at @joelpollak.

Attorney General nominee Merrick Garland struggled Monday with questions about the death penalty during his confirmation hearing in the Senate.

Cotton noted that Garland worked on the case against domestic terrorist and white supremacist Timothy McVeigh for the bombing of a government building in Oklahoma City and asked if he believed it was a mistake to level the death penalty.

Garland confirmed he supported the death penalty at that time.

“I don’t have any regret but I have developed concerns about the death penalty in the twenty-some years since then,” he said.

Garland expressed his concern about the racial disparities in death penalty cases.

Cotton continued his line of questioning, raising the high-profile prosecution of Dylann Roof for the massacre of nine black Americans at a Charleston church.

“Do you believe that it was a mistake to seek the death penalty for Dylann Roof for murdering nine African-Americans as they worshiped in church?” Cotton asked.

Garland said he would not speak about a pending case.

Roof was sentenced to death in January 2017 and awaits execution.

When Cotton asked Garland if he would ever seek the death penalty if confirmed as Attorney General, he replied, “I think it does depend on what policy is adopted going forward.”

Biden campaigned for president on ending the death penalty, which, if fully realized, could mean that Roof may not be executed.

Over three dozen Democrat lawmakers wrote to Biden shortly after he was inaugurated asking him to commute the death sentences for criminals on death row.

“Commuting the death sentences of those on death row and ensuring that each person is provided with an adequate and unique re-sentencing process is a crucial first step in remedying this grave injustice,” the letter read.

During a confirmation hearing before the Senate Judiciary Committee, Garland was asked by Sen. Lindsey Graham (R-SC) if he had ever visited the U.S.-Mexico border to which the federal appeals court judge said he has not.

“No sir, I haven’t,” Garland said when Graham asked.

Specifically, Garland said he is unaware that cartels game the asylum system to tie up Department of Homeland Security (DHS) resources.

The exchange went as follows:

GRAHAM: I’d like you to go because I just got back and I learned that drug cartels are using our asylum laws against us. They will collect people to sort of rush the border and once they are apprehended and most of these claims, 90 percent are rejected. And that will take resources away from securing the border and detecting drugs and protecting the nation against terrorism. This is a behavior by the cartels. Will you look into that practice of using asylum claims by drug cartels to weaken border security? [Emphasis added]

GARLAND: I had not known about this and I will certainly look into this problem. I think the drug cartels are a major menace to our society. The poison that they put into our streets is damaging communities of every kind. [Emphasis added]

The gaming of the U.S. asylum system by the cartels is well documented by experts, federal officials, and agents on the ground. In June 2019, Breitbart News exclusively reported leaders of the Gulf Cartel help traffic migrants into the state of Texas.

The cartel operation has also been acknowledged by establishment media. In March 2019, the Washington Post reported how cartels traffic migrants into the U.S. by utilizing the asylum system. In November 2016, federal immigration officials exclusively told Breitbart News the cartels often coach migrants on how to fraudulently claim asylum in the U.S.

John Binder is a reporter for Breitbart News. Email him at jbinder@breitbart.com. Follow him on Twitter here.