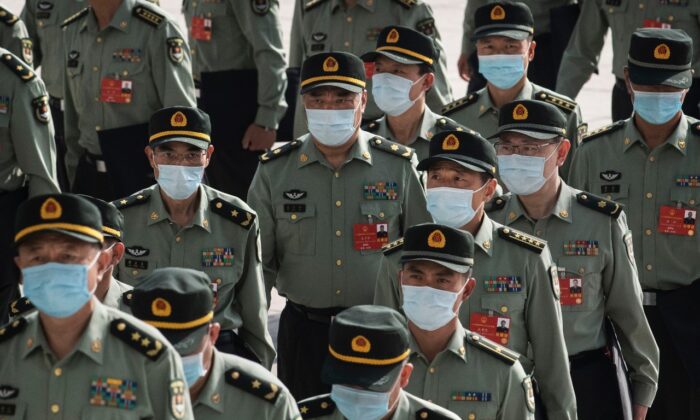 The Chinese regime turned to its military, rather than its health authority, to cover-up and contain the CCP virus outbreak, according to a former White House deputy national security adviser.

This was one reason why the United States was unable to obtain any useful data from the Chinese Communist Party (CCP) in the burgeoning stages of the pandemic, Matthew Pottinger, who served under the Trump administration, told CBS News’ “Face the Nation” in an interview that aired on Feb. 21.

During that time, the U.S. intelligence community looked to the U.S. Centers for Disease Control and Prevention (CDC) for information about the outbreak. But the CDC in turn was reliant on its Chinese counterparts for data, Pottinger said.

“The problem was the Chinese Communist Party did not turn to their CDC to deal with this crisis. They turned to their military. And our CDC did not have relations established with the Chinese military,” he said.

Based on media reports, the head of China’s CDC did not know about the outbreak until Dec. 31, 2019, Pottinger said. This was the date Chinese authorities officially confirmed a cluster of infections in Wuhan, which was one day after local doctors warned of a SARS-like virus on social media.

The Chinese regime did not confirm that the CCP virus, which causes the disease COVID-19, could be spread among humans until Jan. 20, 2020, despite knowing of the disease’s contagiousness before then. It also actively suppressed information circulating online contrary to the official narrative that the outbreak was containable, and punished doctors who sounded the alarm about the disease.

U.S. public health experts were misled by these CCP statements downplaying the severity of the outbreak, which were also parroted by the World Health Organization (WHO), Pottinger said.

American health officials should have sought out information from doctors on the ground in China, rather than “relying on the Chinese government to spoon-feed us what we would need to know,” he said.

Pottinger, who covered the SARS outbreak in 2003 while working as a China correspondent for the Wall Street Journal, said he reached out to old contacts in China in late January 2020 to try to get the real picture of what was happening.

“They were already telling me, look, this thing spreads asymptomatically. Half of the cases or more are asymptomatic. That was a different story from what the Chinese government was telling,” Pottinger said.

The former adviser also drew attention to a fact sheet released in the last days of the Trump administration that raised questions about whether the outbreak could have been a result of a lab accident at the Wuhan Institute of Virology (WIV).

The sheet said the United States has “reason to believe” that several WIV researchers became sick with symptoms of both COVID-19 and common seasonal illnesses in the autumn of 2019.

It also included “the fact that we have very strong reason to believe that the Chinese military was doing secret classified animal experiments in that same laboratory, going all the way back to at least 2017,” Pottinger said. “We also know that they were working on viruses, doing gain of function research study, technical sorts of experiments with viruses, including a virus that was discovered in the southwestern province of Yunnan that is most similar to the virus that we all now know as COVID.”

“Gain of function” research involves creating artificial viruses with new or enhanced capabilities, often to study what new viruses could emerge and how to protect against it.

Given that WIV was doing this kind of research, Pottinger said it’s “highly possible” that this “led to some kind of an accident that seeded the COVID pandemic.”

“If you weigh the circumstantial evidence, the ledger on the side of an explanation that says that this resulted from some kind of human error, it far outweighs the side of the scale that says this was some natural outbreak,” he said.

The former official further noted that the fact sheet was a “very carefully crafted statement” that had been vetted by many divisions within the State Department, staff at the White House’s National Security Council, intelligence officers, and the Department of Health and Human Services.

“This was not a haphazard set of allegations that were laid out in that statement,” he said.

The WHO ‘Has a Lot to Answer For’

Pottinger noted that the WHO team that recently went to Wuhan to probe the virus origins were not able to get answers to the questions posed in the fact sheet, which called on the Chinese regime to release records from the WIV.

“I don’t see any evidence that this panel of researchers affiliated with the WHO were able to get any information on any of these questions,” he said.

Peter Ben Embarek, head of the WHO team, said on Feb. 9 that the possibility that virus leaked from a lab was “extremely unlikely” and didn’t warrant further investigation. But days later, WHO Chief Adhanom Ghebreyesus appeared to walk back on this statement, saying that “all hypotheses remain open and require further study.”

The WHO team was in China for four weeks, two of which were spent in quarantine, and were reliant on Chinese authorities to do the actual investigation, according to WHO adviser Jamie Metzl. The Chinese regime also refused to provide raw data on early COVID-19 cases to the WHO, said one WHO team member.

White House national security adviser Jake Sullivan has called on the CCP to provide more data on the early spread of the CCP virus.

“We do not believe China has made available sufficient original data into how this pandemic began to spread both in China and then eventually around the world,” Sullivan told CBS News in the same report.

“We believe both the WHO and China should step up on this matter,” Sullivan added.

Pottinger said some of the WHO team sent to China were “deeply conflicted.”

“It’s made up of people who have benefited from public funding to work in the very lab where this thing may have actually originated from the Wuhan Institute of Virology. You have people who were hand selected by the Chinese government,” he said.

Peter Daszak, the sole U.S. member on the team, has worked with the WIV for 18 years, and also organized a PR campaign in early 2020 to paint the lab leak theory as a “conspiracy theory.” Earlier this month, he criticized the U.S. skepticism of China’s transparency during the WHO probe, saying in a tweet: “Please don’t rely too much on US intel: increasingly disengaged under Trump & frankly wrong on many aspects.”

Pottinger said the WHO investigation amounted to “a situation where it’s like you’re turning to the rabbits to investigate what happened to the lettuce that they were guarding,”

“It’s not a credible exercise that we’ve seen undertaken to get to the roots of where this thing originated,” he said.