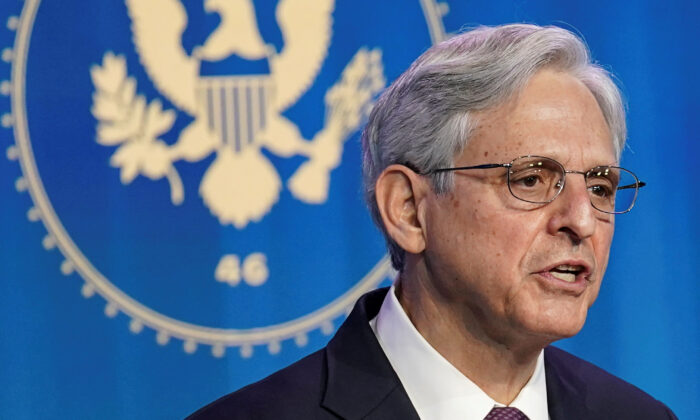 President Joe Biden’s nominee for U.S. attorney general, Merrick Garland, said during his Senate confirmation hearing Monday that he has not spoken with the president about the investigation into his son, Hunter Biden, but insisted that any Justice Department probes will be free of political interference.

“I have not,” Garland replied, adding that, “the President made abundantly clear in every public statement before and after my nomination that the decisions about investigations and prosecutions will be left to the Justice Department.”

“That was the reason that I was willing to take on this job,” Garland said. “So the answer to your question is no.”

Hunter Biden’s tax affairs are currently the subject of a federal probe.

“I learned yesterday for the first time that the U.S. Attorney’s Office in Delaware advised my legal counsel, also yesterday, that they are investigating my tax affairs,” Hunter Biden said in a statement in early December. “I take this matter very seriously but I am confident that a professional and objective review of these matters will demonstrate that I handled my affairs legally and appropriately, including with the benefit of professional tax advisors.”

Biden told CNN in an interview in early December that, as president, he wouldn’t interfere in any Justice Department probes.

“Under attorney general Sessions and Bill Barr, the Justice Department became an arm of the White House, committed to the interests of President Trump,” said Durbin, who chairs the Senate Judiciary Committee.

Durbin said he has “every confidence” in Garland’s ability to oversee the Justice Department, calling his nomination “one of the most critical in Department history,” calling it an “existential moment after four tumultuous years of intrigue, controversy, and brute political force.”

“I would not have taken this job if I had thought politics would have any influence over prosecutions or investigations,” Garland told lawmakers, asserting his commitment to a Justice Department free of political interference.

“The president has promised that those decisions will only be made by the attorney general, and that is what I plan to do. I do not plan to be interfered with by anyone. I expect the Justice Department will make its own decisions in this regard,” Garland said.

Garland, a federal appellate judge and former prosecutor, is widely expected to win Senate confirmation. He has said he plans to prioritize civil rights and combating domestic terrorism if confirmed.