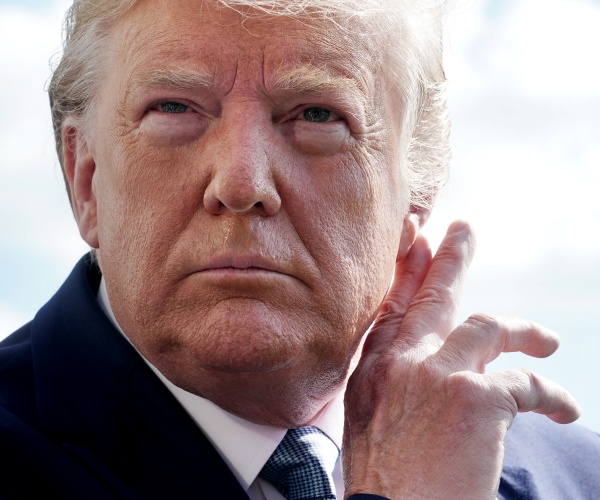 Former President Donald Trump plans to use his appearance at the upcoming Conservative Political Action Conference as a “show of force” that will send the message that he will be the Republican “presumptive 2024 nominee” for the presidency, according to top Trump allies.

“Trump effectively is the Republican Party,” Trump senior adviser Jason Miller told Axios’ Mike Allen for a report Monday that Trump will claim “total control” of the party during his speech this coming Sunday at CPAC. “The only chasm is between Beltway insiders and grassroots Republicans around the country. When you attack President Trump, you’re attacking the Republican grassroots.”

The annual conference will open Thursday in Orlando and run through Sunday, and Trump’s speech there will mark his first public appearance since leaving the White House in January.

Trump’s message is expected to reveal that “I may not have Twitter or the Oval Office, but I’m still in charge,” reports Allen, quoting a “longtime adviser” of the former president. Allen also reported that payback for the election is Trump’s “chief obsession.”

The source also said that Trump, in his CPAC speech, will attack “the swamp,” and that “much like 2016, we’re taking on Washington again.”

Trump will meet with his advisers this week at his Mar-a-Lago estate to map out his next political moves and to set up his plans for kingmaking actions for the 2022 midterm election, including stoking primary challenges for lawmakers who have voted against him. He’s also expected to pour both money and endorsements on his biggest backers. Meanwhile, state-level party officials, after censuring Trump critics like Rep. Liz Cheney, R-Wyo., and Sen. Pat Toomey, R-Pa., are also expected to back up the former president.

Meanwhile, Save America, Trump’s leadership PAC, has $75 million on hand, as well as a database containing tens of millions of names.

However, Axios reports that there are many Trump confidants that think the former president will pretend like he’s running in 2024, but will ultimately pass that by.

This week’s meeting at Trump’s resort is also expected to set up a formal process for vetting people he could potentially endorse after there have been some Republicans saying they’ll run for office if they get his endorsement. The ex-president is expected to set up a requirement that potential endorsees raise money and put together an organization.

Meanwhile, former Vice President Mike Pence has refused an invitation to speak at CPAC, which will feature numerous Trump administration officials and others representing his side of the Republican Party, including former Secretary of State Mike Pompeo, Florida Gov. Ron DeSantis, and South Dakota Gov. Kristi Noem.