New York activists respond to brutal attack on Asian man by rallying against WHITE NATIONALISM, even though the culprit was BLACK 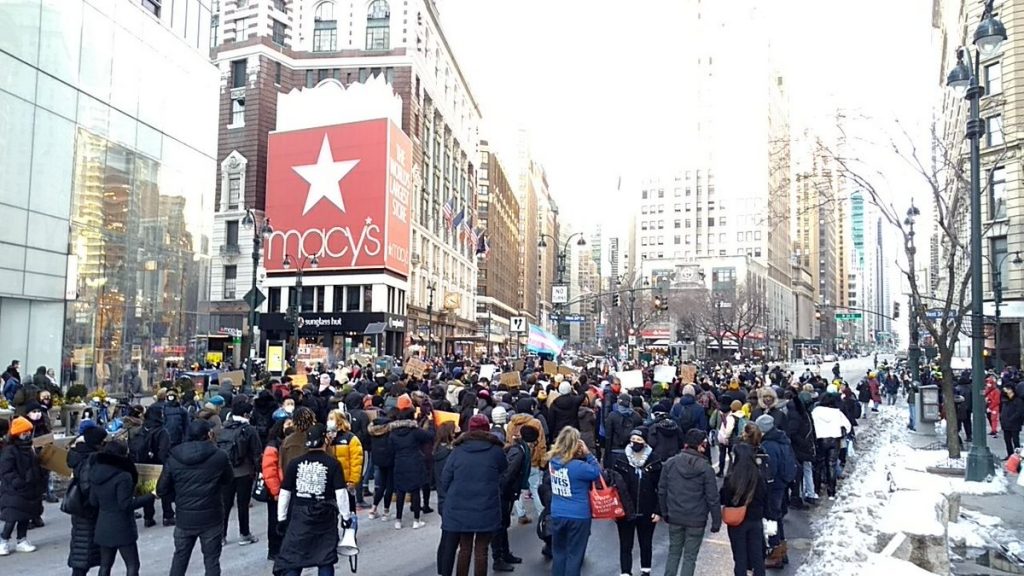 Anti-racism activists in New York have risen up to rally against white supremacy as they demand justice for a Filipino-American man who was viciously slashed with a box cutter on the subway. Never mind that the attacker was black.

Hundreds of protesters gathered at New York’s Washington Square Park on Saturday afternoon and marched through parts of Manhattan, chanting, “Whose streets? Our streets.” The marchers congregated in front of the iconic Macy’s store on 34th Street. One carried a sign declaring, “White nationalism is the virus.”

Organizers billed the event as seeking “justice for the attack on Noel Quintana.” A promotional poster also said, “End the violence toward Asians. Let’s unite against white nationalism.”

Activists are demanding justice against the influx of anti-Asian/AAPI violence that has always been around but which has flourished in the wake of the Covid-19 pandemic. https://t.co/0uEv1yKmSo pic.twitter.com/OBto2SVITA

The 61-year-old Quintana, a native of Manila, was attacked on February 3 on a crowded subway car as he headed to work in the morning rush hour. The attacker repeatedly kicked Quintana’s tote bag, then slashed his face from ear to ear with a box cutter after the Asian man complained. Quintana had to seek help on his own, as none of the bystanders stepped in or called for an ambulance, and he received around 100 stitches to close his wounds.

Police described the alleged attacker as “wearing a black mask with a Louis Vuitton logo and a black North Face coat.”While apparently having a sharp eye for the apparel brands favored by the suspected knifeman, police didn’t mention other appearance aspects revealed in security camera footage of the man, such as his black skin and Afro.

🚨WANTED for an ASSAULT:On 2/3/21 at approx.8:27 AM,on a Manhattan bound “L” 🚂 The suspect slashed a 61 year old male victim on the right cheek with a box cutter causing physical injuries.Any info call or DM NYPDTips at 800-577-TIPS.Reward up to $2,500. @NYPDDetectives @NYPDShea pic.twitter.com/Uk9f8rVMzt

Social media users pointed out the apparent disconnect between the perpetrator of the crime and the race of people targeted in the march for justice. “This is the suspect if you want to identify him,” conservative commentator Ian Miles Cheong said Sunday on Twitter.

This is the suspect if you want to identify him. pic.twitter.com/yhrorqB67Z

Another poster for the anti-racism rally featured Vicha Ratanapakdee, an 84-year-old Thai immigrant who was killed in late January in San Francisco when a man came running from across the street and slammed into him, knocking him to the ground. A 19-year-old black man, Antoine Watson, was arrested and charged with Ratanapakdee’s murder earlier this month.

The incident involving Ratanapakdee was one in a series of unprovoked attacks on elderly Asian Americans in the San Francisco Bay area recently. Yahya Muslim, a 28-year-old black man, was arrested for allegedly shoving a 91-year-old man to the pavement from behind, then knocking down two other Chinese pedestrians on the same street in Oakland’s Chinatown area. Like the Ratanapakdee murder, the January 31 Chinatown attacks occurred in broad daylight.

And just as with the Quintana case in New York, the black-on-Asian attacks in California were blamed on white people. Pulitzer Prize-winning novelist Viet Thanh Nguyen argued that Asians must recognize the violence as “part of a pattern of white supremacy.” Even if the assailants are black, he added, “the solution is not to fall back on racist assumptions of our own but to hold the system of white supremacy responsible for dividing us.”

and Brown communities. Asian Americans need to locate anti-Asian violence as part of a pattern of white supremacy which also targets Black and Brown and Indigenous people. Even if perpetrators of violence are people of color, the solution is not to fallback on racist assumptions

San Francisco diversity activist Michelle Kim offered a similar view, saying Asians have “more work to do to eradicate anti-blackness.” She added that Asians have a “perceived proximity to whiteness,” partly because their “solidarity work with other marginalized communities” was covered up. She wrote an article on the recent spike in hate crimes against Asians, asking, “Who is our real enemy?” Despite acknowledging that the attacks on elderly Asians were perpetrated by blacks, she answered her own question predictably: “White supremacy culture.”

Countless social media observers pointed out the dishonesty of shifting the blame for anti-Asian violence away from those who are committing the crimes, and some pointed out the potential consequences of such deception. “Don’t expect them to stop without addressing who the real perpetrators are,” one commenter said. “If sacrificing your grandma to prove you aren’t racist is worth it, go ahead.”