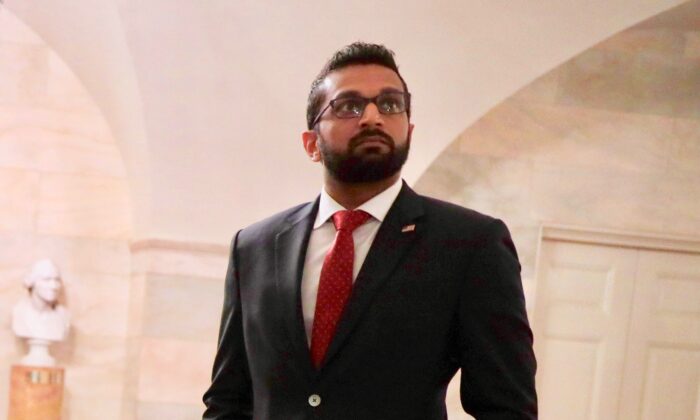 President Joe Biden’s recent comments describing the Uyghur genocide in China as a matter of different cultural norms are allowing “outrageous conduct” to continue and pose “a serious threat to the world,” former Department of Defense Chief of Staff Kash Patel said in an interview on Sunday.

“They are in genocide in China against the Uyghurs. That is factually not in dispute and for the leader of the free world to say genocide is a cultural norm is outrageous,” Patel told Fox News’ Maria Bartiromo.

“Could you imagine if President Trump said publicly that the Uyghur genocide in China, which everyone acknowledges, is a cultural norm? It would have been a global calamity,” Patel continued. “But because the left-wing media allows the politicization of our national security to continue just because Joe Biden said it, it allows for this outrageous conduct.”

During a CNN town hall on Feb. 16, Biden described his two-hour phone call with Chinese Communist Party (CCP) leader Xi Jinping. Biden appeared to rationalize Xi’s actions by suggesting that China has historically been “victimized” by outside forces when it was not “unified” from within.

“If you know anything about Chinese history, it has always been—the time when China has been victimized by the outer world is when they haven’t been unified at home,” Biden said. “The central principle of Xi Jinping is that there must be a united, tightly controlled China. And he uses his rationale for the things he does based on that.”

Biden said he made it clear to Xi that he must speak up about human rights and that Xi eventually said he “gets it.” Biden then said, “Culturally, there are different norms that each country and they—their leaders—are expected to follow.”

Although it is unclear whether Biden was referring to himself or Xi when he spoke of the “different norms,” the statement drew criticism because Biden appeared to not take issue with genocide being the norm. Biden may have been referring to the fact that he, as the U.S. president, must speak up about human rights, with Xi acknowledging that as a cultural norm. The Epoch Times sent a request for comment and clarification to the White House.

“No American President can be sustained as a President if he doesn’t reflect the values of the United States. And so the idea I’m not going to speak out against what he’s doing in Hong Kong, what he’s doing with the Uyghurs in western mountains of China and Taiwan, trying to end the One China policy by making it forceful. I said—and by the—he said he—he gets it. Culturally, there are different norms that each country and they—their leaders—are expected to follow,” Biden said.

Patel said Biden’s remarks didn’t cause the scandal only with the aid of left-wing media, which allows the CCP’s “outrageous conduct” to continue.

“Because the left-wing media allows the politicization of our national security to continue just because Joe Biden said it, it allows for this outrageous conduct, and more importantly, the death and decimation of a minority population in China who are encamped in fenced enclosures and cannot leave and are undergoing re-education therapy. This is a serious threat to the world,” Patel said.

In the last full day of the administration of President Donald Trump, the United States issued a determination declaring that the CCP engaged in genocide and crimes against humanity since at least 2017 in its treatment of the Uyghurs. The crimes included “the arbitrary imprisonment or other severe deprivation of physical liberty of more than one million civilians, forced sterilization, torture of a large number of those arbitrarily detained, forced labor, and the imposition of draconian restrictions on freedom of religion or belief, freedom of expression, and freedom of movement,” Secretary of State Mike Pompeo said in a statement.

Biden’s remarks followed those of a number of his appointees, who during confirmation hearings displayed a more lax stance on China than that of the Trump administration.

Patel pointed out that Biden’s remarks at the CNN town hall are an extension of the view of China the president revealed when responding to a question about punishing China for not being truthful about the CCP virus, commonly known as the novel coronavirus. Biden said on Feb. 10 that he is “interested in getting all the facts” when he was asked about punishing China for the coverup.

“We know where the virus came from,” Patel said. “Either he’s not getting briefed and people aren’t telling him or he’s getting briefed and not remembering it. But it is a hard fact that the virus came from Wuhan and this is the type of politicization of both the intelligence community and the defense apparatus that the American people just deserve better, and the media is letting them get away with it.”