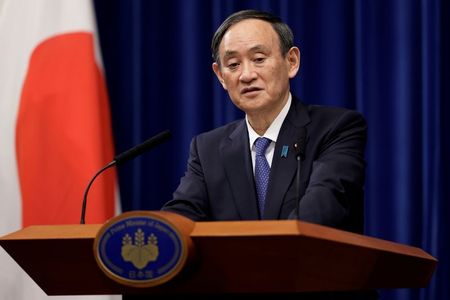 TOKYO (Reuters) – Support for Japanese Prime Minister Yoshihide Suga’s government has weakened mainly due to unhappiness with its handling of the coronavirus pandemic, an Asahi newspaper poll found on Monday.

Support for Suga’s cabinet dropped to 33% from 39% last month, with disapproval rising 10 points to 45%, the poll showed.

Critics say Suga was too slow to act after COVID-19 cases began surging late last year, with his decisions to halt a domestic tourism campaign and declare a one-month state of emergency for Tokyo and other areas coming too late.

The Asahi poll, which was conducted by telephone on Saturday and Sunday, showed 80% of respondents thought the emergency declaration was too slow.

Japan has had a total of 365,723 cases of the novel coronavirus and 5,120 deaths, public broadcaster NHK said.