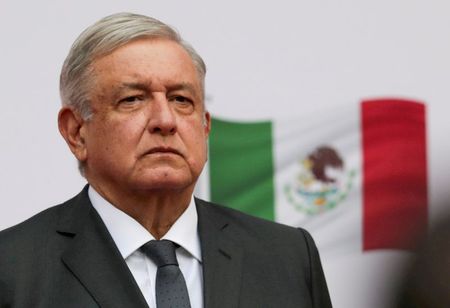 MEXICO CITY (Reuters) – Mexican President Andres Manuel Lopez Obrador said on Sunday he had tested positive for COVID-19, adding his symptoms were light and that he was receiving medical treatment.

Mexico is in the grip of a second wave of the pandemic, with the country’s official death toll from COVID-19 set to pass a grim milestone of 150,000 in coming days.

“As always, I am optimistic,” said Lopez Obrador, 67, who has resisted wearing a face mask.

Lopez Obrador said on Twitter that his interior minister would run his regular morning news conference in his absence.

However, he said he would still hold a scheduled call with Russian President Vladimir Putin on Monday and keep an eye on public affairs while receiving treatment.

Foreign Minister Marcelo Ebrard said on Twitter the leaders’ conversation would address “the future of the bilateral relationship, as well as the supply of Russian vaccines to Mexico”.

The government said this month it aims to acquire 12 million doses of Russia’s Sputnik V, with the first potentially arriving as soon as the coming week.

Mexico aims to administer 7.4 million doses of Sputnik V by the end of March, as the country scrambles to quickly secure as great a supply of vaccines as possible.