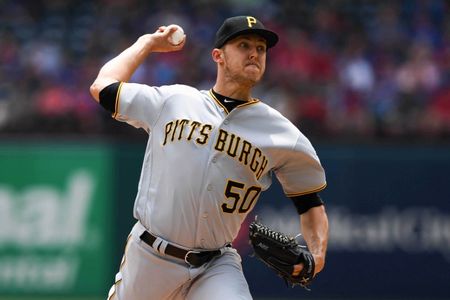 The New York Yankees acquired right-hander Jameson Taillon from the Pittsburgh Pirates on Sunday in exchange for four minor-league prospects.

The Pirates received pitchers Miguel Yajure and Roansy Contreras, shortstop Maikol Escotto and outfielder Canaan Smith in the deal. Per MLBPipeline, Yajure was the Yankees’ No. 15 prospect, Contreras No. 19 and Smith No. 21.

“Bittersweet day for me over here! Trying to process everything- have SO much to say to the city of Pittsburgh and my teammates,” Taillon wrote on Twitter. “Also have SO much to say about this incredible opportunity and to the city/fans in New York. Thanks to everyone that has reached out! More to come soon”

Taillon, 29, recorded 14 wins with Pittsburgh in 2018 before appearing in just seven games the following season. He missed all of the 2020 campaign while recovering from his second Tommy John surgery.

The addition of Taillon comes on the heels of the Yankees agreeing to terms on a one-year, $11 million contract with two-time Cy Young Award recipient Corey Kluber.