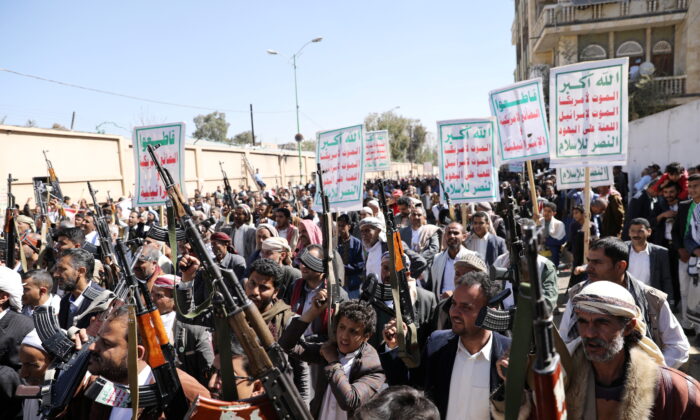 President Joe Biden’s administration is reviewing the designation of the Houthis as a terrorist group that was made late in former President Donald Trump’s term.

“The State Department has initiated a review of Ansarallah’s terrorist designations,” a spokesperson told news outlets.

“We will not publicly discuss or comment on internal deliberations regarding that review; however, with the humanitarian crisis in Yemen we are working as fast as we can to conduct the review and make a determination.”

The State Department believes that the Houthis, an Islamic clan also known as Ansarallah, “bears significant responsibility for the humanitarian catastrophe and insecurity in Yemen,” but wants to make sure the United States is “not impeding the provision of humanitarian assistance.”

“These designations will provide additional tools to confront terrorist activity and terrorism by Ansarallah, a deadly Iran-backed militia group in the Gulf region. The designations are intended to hold Ansarallah accountable for its terrorist acts, including cross-border attacks threatening civilian populations, infrastructure, and commercial shipping,” Pompeo said in a statement.

“The designations are also intended to advance efforts to achieve a peaceful, sovereign, and united Yemen that is both free from Iranian interference and at peace with its neighbors. Progress in addressing Yemen’s instability can only be made when those responsible for obstructing peace are held accountable for their actions.”

The Trump administration was aware of concerns that the designations would impact the humanitarian situation in Yemen but said it was going to put in place measures that would reduce that impact.

Several nonprofits said the designation would have a negative impact. “This policy, in the name of tying up the Houthis, will actually tie up the aid community and international diplomacy. The opposite is needed—effective pressure on all parties to the conflict to cease using civilians as hostages in their war games,” David Milliband, the head of the International Rescue Committee, said in a statement.

Biden’s secretary of state nominee, Anthony Blinken, told senators during his recent confirmation hearing that the Houthis “overthrew a government” and “have committed atrocities and human rights abuses.”

“What’s also a fact though is that the Saudi-led campaign in Yemen pushed back against the Houthi aggression, has contributed to what is, by most accounts, the worst humanitarian situation that we face anywhere in the world, and one aspect of that situation is that about 80 percent of the Yemini population right now is in areas controlled by the Houthis. Whether we like it or not we have to find ways to get assistance to them if we’re going to do anything about addressing the situation,” he said.

“So my concern, deep concern about the designation that was made, is that, at least on its surface, it seems to achieve nothing particularly practical in advancing the efforts against the Houthis and to bring them back to the negotiating table while making it even more difficult than it already is to provide humanitarian assistance to people who desperately need it,” he added, proposing a review of the designation to make sure it wasn’t impeding humanitarian assistance.