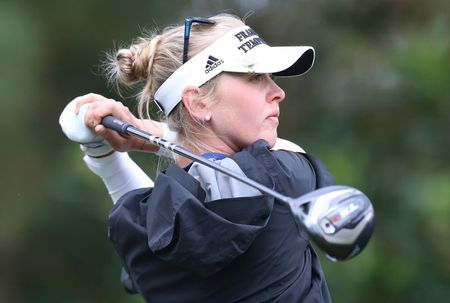 (Reuters) – Jessica Korda etched her name into the record books on Saturday, carding an 11-under par 60 in the third round of the Tournament of Champions at Lake Buena Vista, Florida, for the joint second-best round in LPGA history.

The 27-year-old American, just the fifth in LPGA history to card a 60, started the round with back-to-back birdies before turning up the heat on the back nine, where she had seven birdies and drained an 18-foot putt for eagle on 17.

“Once I made eagle on 17, I looked at my score card (and) I was like ‘Ooo – OK,'” said Korda, who told reporters she hadn’t previously realized the magnitude of her accomplishment at Tranquilo Golf Course.

“Days like today don’t come often, so you really cherish them when they do. Everything has to come together to have a day like today.”

Korda finished the day two strokes behind 2017 Women’s PGA Championship winner Danielle Kang, and is the eighth player ever to shoot an 11-under par at an LPGA tournament, two strokes behind the record low 13-under shot by 10-time major winner Annika Sorenstam in 2001.

“Honestly I need to look back at it,” said Korda. “It was incredible, I hit some really good shots, I didn’t have too many long putts, so definitely ball striking obviously helped.”

Her headline-grabbing round was an extra treat for her father, 1998 Australian Open winner Petr Korda, who celebrated his 53rd birthday on Saturday, said Korda.

She will play on Sunday alongside Kang and younger sister Nelly (67), who finished Saturday six strokes back from the lead in third.