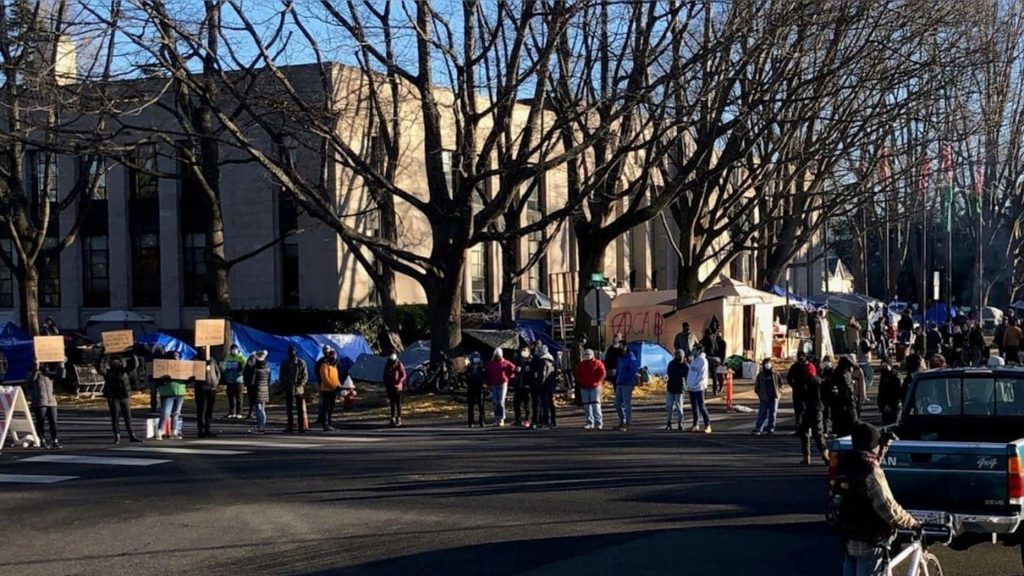 The mayor of Bellingham, Wash., reportedly had to be rushed out of City Hall on Friday morning after rioters advocating for the homeless stormed the building.

“It was unsettling,” Mayor Seth Fleetwood, who remained undeterred about asking those in a homeless encampment outside of the building to move 25 feet away, told KIRO-TV of Seattle.

“They banged on the door and we got word they had somehow broken it open and were entering, and I was advised to leave.”

He was taken out the back door to his car, the station reported. Fleetwood said he couldn’t help comparing it to the rioters who breached the U.S. Capitol in Washington, D.C., on Jan. 6.

The rioters also spray painted the outside of the building, the Bellingham Herald reported.

This undated photo shows protesters outside of Bellingham’s City Hall where a homeless encampment has taken root.  (City of Bellingham website )

Bellingham Police told the Herald around 20 rioters got inside the lobby but no damage was done and no one was hurt.

The Herald reported that those who breached City Hall left without incident and no arrests were made.

Bellingham is a college town about 88 miles north of Seattle, which has been a center for anti-police protests and riots since last spring, including an anti-Biden riot on Inauguration Day that left damage at Pike Place Market.

The group that attacked Bellingham’s City Hall also pulled down an American flag that was flying outside the building and began stomping on it. Someone was able to save the flag from the rioters, KIRO reported.

Fleetwood told KIRO the city planned to ask the members of the homeless encampment that took root late last year to move 25 feet away from the building after several issues, including harassment of county employees and several fires.

“We seek a peaceful end to this encampment and if there is confrontation, we will not be the aggressors,” he said.

He added the city is giving those in the encampment services and supplies and asking them to leave voluntarily.

The rioters also reportedly grew hostile toward local journalists who they accused of invading their privacy.

One radio reporter said the rioters stole his microphone, spray-painted him, threw hot chocolate on him and tried to take his other equipment, including his iPad. He said the rioters had shouted that he was taking “unauthorized” photos of the protest.

“I’ve never experienced that kind of belligerence,” he said, according to KIRO. “We’ve had protests in Bellingham and I’ve never seen anyone act that way.”