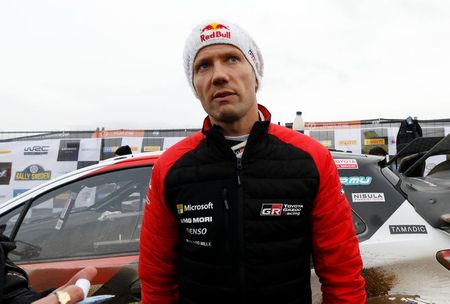 The Frenchman, who was born and grew up in Gap where the rally is based to the north of the Mediterranean principality, stretched out a 13-second lead over Welshman Evans with Sunday’s four stages remaining.

Finnish driver Kalle Rovanpera completed a Toyota sweep in third place, 56.8 seconds off the lead after the day’s three stages on snow and ice-covered asphalt in the foothills of the French Alps.

“Conditions in this morning’s opening stage were very difficult,” said Ogier, who won that ninth stage. “In some corners it didn’t feel like we had any studs in our tyres.

Evans pulled back some time at the end of the leg, winning the final stage.

“I needed that really,” he said. “I haven’t been on the money, but we’ll try to keep the pressure on tomorrow.”

Hyundai’s Ott Tanak, the 2019 world champion who won Thursday’s opening two stages, retired from the event for the second year in succession after starting the day third.

The Estonian went out with less drama than last year’s heavy crash, this time having to retire after two punctures on successive stages and only one spare.

That left him with tyres that were too worn to continue driving on public roads and no possibility to rejoin on Sunday.

“We tried to put the first damaged tyre back on the car to make the road section but it didn’t last,” said Tanak. “Nothing much more we could do. We made it to service but had to retire the car.”

The rally is being held without spectators due to the COVID-19 pandemic and in compliance with a French evening curfew.

(Reporting by Alan Baldwin in London, Editing by Hugh Lawson)