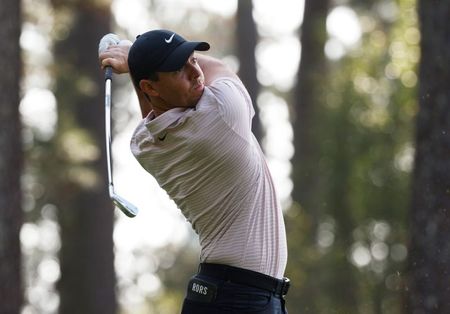 (Reuters) – Rory McIlroy leapfrogged Tyyrell Hatton to reclaim a one-shot lead after the third round of the Abu Dhabi HSBC Championship, carding 67 to go 13-under overall on Saturday.

McIlroy, the world number six, was five shots off overnight leader Hatton and finished his incomplete second round on par early on Saturday before the 31-year-old clawed his way back into the lead in the third.

The Northern Irishman had five birdies and a stunning eagle on the 10th when his shot from 73 yards landed on the green and rolled straight into the cup.

“It’s so blustery and it’s a different type of golf than we’re used to playing here in Abu Dhabi, where there’s usually not much wind. You feel like you have a chance on every hole,” McIlroy said.

“There’s like a little more scrambling involved and longer putts. So I thought I did well today. Obviously had that big stroke of luck on 10, the ball hitting the pin and going in.

Hatton, who carded three eagles in the first two rounds, was let down on the front nine with two bogeys, on the fifth and seventh, and he managed only three birdies in the round.

“It was a difficult day. The conditions were really tough for the whole day,” he said.

“I just felt like I had nothing really go my way. Hit a couple decent shots and ran into a bunker with a terrible lie and had quite a few putts burning the edge or lipping out.”

Hatton’s compatriot Tommy Fleetwood is also in contention, with the Englishman moving up eight positions to third, two strokes behind McIlroy.

(Reporting by Rohith Nair in Bengaluru; Editing by Hugh Lawson)