Rockets visit Mavs in matchup of teams on back-to-backs 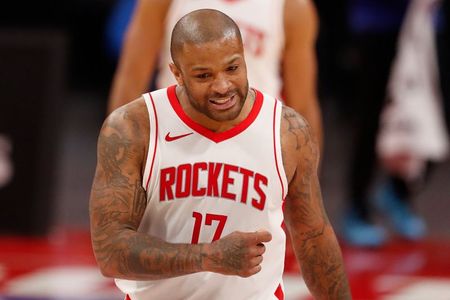 In many ways, the Houston Rockets got exactly what they needed Friday night in Detroit, a truth that goes beyond their second road win of the season and the end of their three-game losing skid.

The Rockets will hope to build on their momentum in a Saturday road game against the Dallas Mavericks.

Houston blew a lead that reached 20 points midway through the second quarter, only to rally from a third-quarter deficit before posting a 103-102 victory over the Pistons. They did so without center Christian Wood (ankle) and with point guard John Wall missing his fifth consecutive game with knee soreness.

Houston used its 10th starting lineup in 14 games and is likely to try an 11th on Saturday in Dallas. Center DeMarcus Cousins is unlikely to play in the back-to-back after posting five points, 15 rebounds, seven assists and two blocks over a season-high 33 minutes against the Pistons.

Only P.J. Tucker and Jae’Sean Tate have played in every game this season for Houston, the standard-bearer for makeshift lineups.

That trio added 22 rebounds and nine assists, completing a collective effort from a team in desperate need of one, a group still trying to discover some cohesion following an opening month of constant roster upheaval.

“It’s going to have to be everybody,” Rockets coach Stephen Silas said. “We are short-handed and we have been most of the year. And for David and Sterling and Ben to have the contributions that they had, it basically helped us win the game, for sure.”

The Rockets could add another contributor to their fluctuating rotation following the acquisition of second-year swingman Kevin Porter Jr. from the Cleveland Cavaliers. The troubled 20-year-old has yet to play this season due to off-court issues and became expendable following a locker-room tirade earlier this week, but his potential is unquestioned.

“He hasn’t played in a while, so it’s going to be up to us to really come up with a good structure for him on and off the court for him to be successful,” Silas said. “And we’re committed to that.”

The Mavericks produced their second consecutive win Friday, 122-117 over the host San Antonio Spurs, even though were again without Dorian Finney-Smith, Maxi Kleber, Dwight Powell and Josh Richardson, all sidelined due to health and safety protocols.

“There are a lot of medical things that need to be taken care of and they have to get back into workouts for a period of time before they’re cleared to play games,” Mavericks coach Rick Carlisle said. “We’ll have to see, but the more the clock ticks, the better.”

Dallas won at Houston 113-100 on Jan. 4, and the Mavericks appear to have settled into a rotation capable of succeeding despite the absences. Better still, they appear to have corrected the issues that plagued them late in games last season.

“We’ve gotten a year older, a year wiser,” Carlisle said. “We spent more time working on crunch-time situations, talking about it and understanding it’s a big part of where we want to go as a team. We need to execute and keep our poise. The biggest thing is we just kept our cool.”