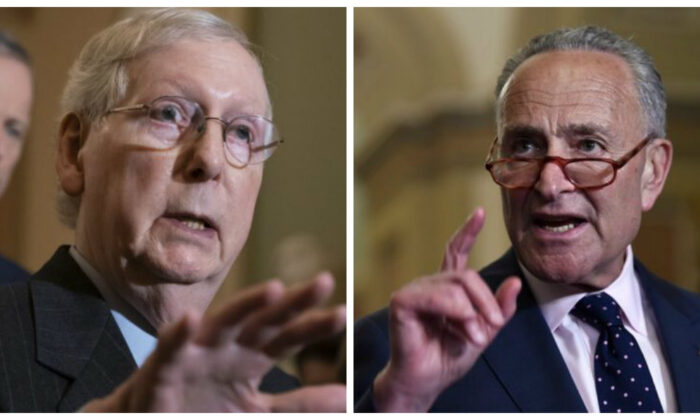 Senate Majority Leader Chuck Schumer (D-N.Y.) and Senate Minority Leader Mitch McConnell (R-Ky.) are at at loggerheads over a power-sharing arrangement in the 50-50 split upper chamber, with a rift over the filibuster rule keeping the two from reaching a deal on how to manage proceedings.

Schumer and McConnell started talking earlier this week about a possible power-sharing deal governing daily operations, because even though Democrats have the majority in the Senate since Vice President Kamala Harris can cast a tie-breaking vote, she cannot be expected to take part in Senate proceedings every day to decide every dispute.

As part of the negotiations around the power-sharing arrangement, McConnell has made a demand for a promise to protect the long-standing Senate rule requiring a supermajority of 60 votes to advance most legislation, known as the legislative filibuster. The rule protects the Senate from partisan control of the majority.

“The American people chose to retire four Republican Senators and elect a Democratic majority to this Senate. Senator McConnell’s proposal for how to organize the Senate is unacceptable—and it won’t be accepted,” Schumer wrote in a tweet Friday.

Their dispute is holding up the basic organization and work of the Senate as it begins the new year with 50 senators from each party.

McConnell said on Thursday, “I cannot imagine the Democratic leader would rather hold up the power-sharing agreement than simply reaffirm that his side won’t be breaking this standing rule of the Senate,” referring to the filibuster.

Progressive Democrats have suggested the 60-vote threshold rule should be ditched so that Democrats can pass their agenda without needing to win any Republican support. Moderate Democrats, like Sen. Joe Manchin (D-W.V.) favor keeping the legislative filibuster.

Democrats could unilaterally change the filibuster rule to require only a simple majority for legislation to advance, if all 50 Democrats plus Vice President Kamala Harris agreed to do so, a gambit so contentious it is sometimes called the “nuclear option.”

Speaking on the Senate floor on Friday, Schumer referred to the deal struck decades ago, saying that in 2001, then-Majority Leader Trent Lott (R-Miss.) and then-Minority Leader Tom Daschle (D-S.D.) “came together and agreed on a set of rules to govern a 50-50 Senate. We should follow that precedent.”

“We could organize the Senate today if both sides agree to abide by the same rules as last time. The Republican leader, however, has made an extraneous demand that would place additional constraints on the majority,” Schumer said, referring to McConnell’s insistence on retaining the filibuster.

McConnell, in a statement, countered by saying that “when Leaders Lott and Daschle wrote a similar agreement 20 years ago, there wasn’t a need to reaffirm the basic standing rules that govern legislation in the Senate. It was safely assumed that no majority would break this rule for short-term gain.”

The Kentucky Republican referred to discussions on the Senate floor surrounding the 2001 power-sharing talks, which “specifically cite the legislative filibuster as an important and unquestioned part of the backdrop that lay beneath the negotiations on the finer details,” adding that it was assumed no one would ever seek to try and remove the filibuster.

“After the fact, Leader Daschle, the Democrat, praised the legislative filibuster as a crucial rule,” McConnell added, noting that President Joe Biden “has praised this distinctive feature of the Senate on many occasions” and Democrats in the Senate relied on the 60 vote supermajority rule extensively when they were in the minority.

“Democrats used the filibuster constantly,” McConnell said. “They were happy to insist on a 60-vote threshold for practically every major bill we took up.”

“More than two dozen signed a bipartisan letter in 2017 saying our Republican majority should not break this rule by brute force,” McConnell said.

“I agreed. I didn’t do it,” McConnell said, adding that Republicans will continue to insist that Democrats reaffirm the filibuster.

“If we’re going to truly replicate the 2001 agreement, we need to reaffirm this crucial part of the foundation that lay beneath it,” McConnell said.