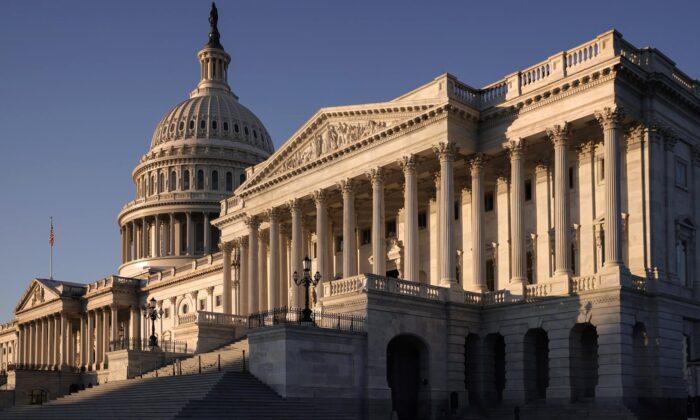 A growing number of House and Senate Democrats are calling on the new Senate Majority Leader Chuck Schumer (D-N.Y.) to reject Senate Minority Leader Mitch McConnell’s (R-Ky.) request to respect the decades-old filibuster rule, which protects the Senate from partisan control of the majority.

“Minority rights on legislation are key to the Senate. President [Joe] Biden spent decades defending them. More than two dozen Senate Democrats backed them just four years ago,” McConnell wrote in a Twitter post on Thursday.

He added, “This isn’t complicated. Simply reaffirming that Democrats won’t break the rules should not be a heavy lift.”

Politico heard from some Democratic senators including Sen. Jon Tester (D-Mont.) and Sen. Richard Blumenthal (D-Conn.) who want Schumer to eliminate the filibuster.

“Chuck Schumer is the majority leader and he should be treated like majority leader. We can get [expletive] done around here and we ought to be focused on getting stuff done,” Tester said. “If we don’t, the inmates are going to be running this ship.”

“It would be exactly the wrong way to begin,” Blumenthal said. “We need to have the kind of position of strength that will enable us to get stuff done.”

McConnell during a Senate floor speech congratulated Schumer for his promotion from minority to majority leader and reiterated his position for keeping the filibuster.

“For this 117th Congress, the American people chose an evenly-split Senate: Fifty Republicans and fifty Democrats. With the election of Vice President Harris, that means the Democratic leader will act as Majority Leader,” he said.

A filibuster to prevent a Senate vote on a bill can only be broken by a cloture vote, which requires a supermajority of 60 votes to allow the Senate to act on the pending bill.

McConnell said there is precedent, from an evenly split Senate 20 years ago, of Democrats and Republicans honoring the filibuster.

“Now, I’ve been heartened to hear my colleagues say he wants the same rules from 2000 to apply today. Because certainly 20 years ago, there was no talk—none whatsoever—of tearing down longstanding minority rights on legislation.”

With Americans now represented by an evenly-split Senate, the two Senate leaders have been in talks to reach an agreement on how to keep the upper house running, with McConnell pushing for the 60 vote supermajority to be kept.

Sen. Chris Murphy (D-Conn.) wrote, “So after Mitch McConnell changed the Senate rules at a blistering pace during his 6 years in charge, he is threatening to filibuster the Senate’s organizing resolution unless the Democratic majority agrees to never change the rules again. Huh.”

Republican Sen. Marco Rubio (R-Fla.) quoted from a speech by Biden when he served as a senatori, in which the new president advocated for keeping the filibuster.

“A former Senator once said: ‘The very reason why we have the filibuster rule is so when one party, when one interest controls all the levers of government, one man or woman can stand on the floor of the Senate & resist, if need be, the passions of the moment.’ Makes sense to me!” Rubio wrote on Twitter.

McConnell also reminded his colleagues that Biden had previously advocated to defend the legislative filibuster. He also pointed out that less than four years ago, 27 current Democratic senators and Vice President Kamala Harris signed a letter insisting that the rule should not be eliminated.