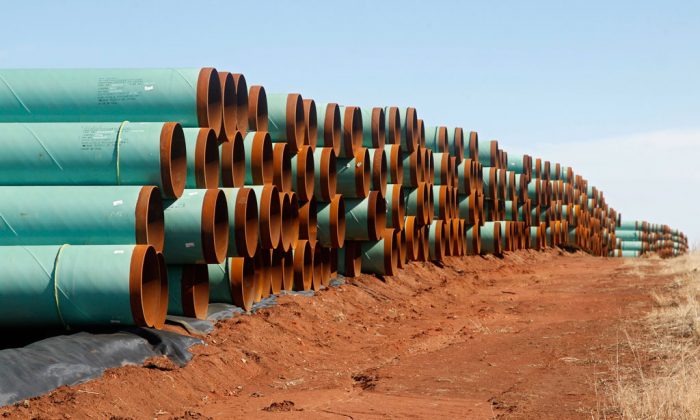 “President Biden’s decision to rescind an essential permit for the Keystone XL pipeline puts thousands of present and future union jobs at risk and undermines the trust of our friends and allies in Canada who have invested billions of dollars into the completion of this vital pipeline,” House Minority Whip Steve Scalise (R-La.) said in a joint statement with Representatives Markwayne Mullin (R-Okla.) and Jeff Duncan (R-S.C.).

“American energy security will also be undermined because this Canadian energy, destined for refineries along the Gulf Coast, will now be replaced by imports from unreliable OPEC countries,” the HEAT statement said.

One of Biden’s first acts within hours of being sworn-in Wednesday as the nation’s 46th President was withdrawing the permit that President Donald Trump issued in 2017.

Trump’s action broke a decade-long logjam of congressional debate, bureaucratic inaction, and court litigation that delayed construction of the pipeline designed to bring oil from Alberta, Canada to refineries in Illinois and Texas, as well as a massive tank farm and oil pipeline distribution center in Oklahoma.

Rep. Pete Stauber (R-Minn.) criticized Biden’s action in a statement in which he described the economic impact of the pipeline project:

“The Keystone XL pipeline would support over 10,000 union construction jobs in the U.S. and wages are expected to exceed $2.2 billion. The Project Labor Agreement (PLA) with four North American unions would ensure the project is built with well-paying union jobs.

“In addition to the creation of direct American union jobs, roughly $1.6 billion in construction contracts were recently awarded to companies in Wisconsin, Montana, and Texas. In total, project expenditures are occurring with businesses in 29 states.

“The Keystone XL pipeline would generate over $100 million in annual property taxes for rural American communities to fund schools, infrastructure, and local services. Keystone XL has committed over $500 million for indigenous suppliers and employment opportunities for tribal communities.”

Rep. Bob Latta (R-Ohio), a member of the House panel, said, “We must stop playing politics with America’s energy future. The House of Representatives has repeatedly approved legislation to build the Keystone XL Pipeline because boosting our economy, creating jobs, and ensuring safety and reliability is common sense.”

Another GOP member of the House panel, Rep. Buddy Carter of Georgia told The Epoch Times Thursday that “crushing the progress made over the last four years will kill Americans jobs and further divide our nation. Stopping the Keystone XL pipeline alone will threaten 11,000 jobs and over $1.6 billion in wages. It’s very disappointing to see this President go after hardworking Americans right out of the gate.”

A third GOP member of the House panel, Rep. Bill Johnson of Ohio, told The Epoch Times that, “it takes a tremendous, special arrogance to make killing off thousands of good-paying American jobs one of your first acts as President. Is this just the start of an anti-energy agenda that will target more jobs, increase the cost of living, and limit opportunities for the American people? Unfortunately, probably yes. It is, after all, what President Joe Biden promised to do.”

Sen. Kevin Cramer (R-N.D.), whose state would reap multiple benefits from the project, said “Biden bemoaned the loss of millions of jobs and promised to put people back to work, but now he’s taking action to eliminate thousands more. This is an early mistake by the President and a nod to far-left environmental extremists. I urge him to reconsider his approach.”

Democrats on the Senate Energy, Environment and Public Works Committee and the House panel were somewhat quiet about Biden’s decision.

None of the nine Democrats on the Senate panel released statements on Biden’s Keystone decision, though one of them. Sen. Martin Heinrichs of New Mexico praised the new president’s decision to rejoin the Paris Climate Accord that Trump withdrew the United States from in 2017.

A spokesman for Heinrich did not respond to The Epoch Times’s email asking if the absence of the Keystone issue from the Paris Accord statement reflected the New Mexico lawmaker’s reservations or opposition to Biden’s action.

Similarly, a spokesman for Rep. Frank Pallone (D-N.J.), the House panel’s chairman, did not respond when asked by The Epoch Times about the issue.

The silence among Democrats may reflect worries about the fact cancellation of Keystone will cost thousands of union construction workers high-paying jobs.

“Canceling Keystone XL will not reduce American oil use—and that’s a good thing. To the extent Biden is successful in reducing American utilization of fossil fuels, it will force us to become dependent on Chinese rare earth minerals and Chinese wind and solar equipment. That would be a very dangerous development for American energy security.”

And Jason Isaac, Director of the Texas Public Policy Foundation’s Life-Powered Project, told The Epoch Times that, “this is just another cancellation pandering to the self-righteous Left that jeopardizes American energy independence. Rather than goods being produced in America—a global leader in environmental protection—now production will be shifted overseas to unstable countries that pollute with abandon. China, Saudi Arabia, and Russia are cheering loudly as President Biden boosts their economies with the stroke of a pen.”