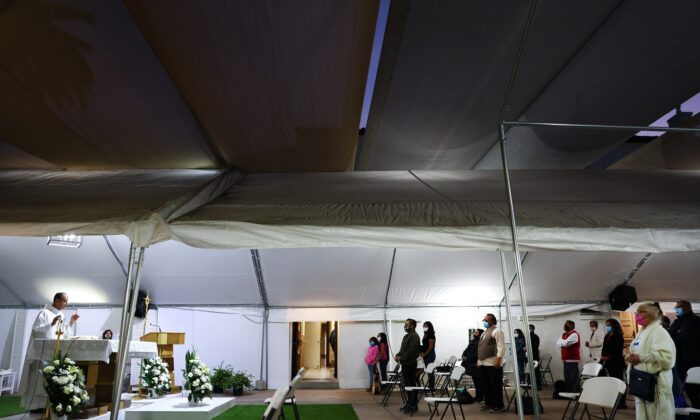 When people are in desperate need of survival they will be able to accept any solution that gives them hope including government-imposed mandates. Even progressivism, socialism, or communism can be accepted by an anti-communist society as happened to Romania after World War II and can be seen in America right now, said Pastor Cristian Ionescu, a Romanian Immigrant, and Chicago Pastor who fled persecution in Communist Romania as a religious refugee.

“When you condition a society to collectively think in terms of surviving, [being] desperate for survival you will get them to accept anything,” Ionescu said in a recent interview on Epoch Times’ Crossroads program.

“This is the reason any time the government imposes something and mandates something I’m very suspicious. … A government should be able in a democracy to convince people to accept something [for the common good], not mandate it—this is the difference between totalitarianism and democracy,” Ionescu continued.

A rush to impose mandates is seen in America now with the CCP (Chinese Communist Party) virus pandemic when people fight for their own survival, pastor Ionescu said citing the government’s decision to close churches in response to COVID-19.

“The reaction to the virus is an orchestrated effort to destroy the church, to destroy conservatives, to destroy people with basic values and traditional values in a society. At worst it was programmed and originated deliberately, at best it was exploited and used for their purpose,” he said adding however that the challenge posed by the virus is real.

The government officials should have known better than everybody to what degree this pandemic is dangerous but they have not acted like that, Ionescu said. They afforded themselves some privileges that they cut everybody else from having so, he explained.

“I saw the hypocrisy when they condone rather large demonstrations with no restrictions [due to pandemic] but then they banned others which were [democratic] and religious in nature,” Ionescu said.

“People should understand the church is not a video game, a church is not an online affair. Church has to be physical, and it has to be gathering, and has to be fellowship, physical fellowship. This is the core and is an elemental basic survival prerogative of a church and religious activity obviously—for me closing down churches was a death sentence for the church,” Ionescu said.

Communist Rule in Romania is a Warning to America

During communist rule in Romania, students were taught in school that communism and Marxism can never be imposed in a society in a peaceful way—it can only be done via a revolution, Ionescu said. This is “because people will never voluntarily give up their freedoms, their possessions, and their privileges so you need to take them away … by force,” he added.

To take total control of a society, the government has to create as much hate and as much division as possible, Ionescu said based on his experience when living in communist Romania.

Although in Romania socialism was imposed by the Soviet Army, the communist party needed to maintain its control over the society, Ionescu said. To achieve this, the government created “a society of fear, of survival, lacking basics, and getting them as a result of the government handouts,” he explained.

In Romania, people had a little bit of meat, bread, milk, they had jobs provided by the communist government as long as they would fall in line and would not be individualistic about their opinions or religion, Ionescu recalled.

He is amazed to see the Americans, who were bred to be self-reliant and innovative, diverted towards that mindset that the government should provide handouts for people.

“Communism is a cannibalistic society at its core and they have absolutely no problems with throwing their own to the wolves … once a person had ended [his] usefulness,” Ionescu continued.

An example was Lucreţiu Pătrăşcanu, a Romanian lawyer, who was one of the intellectuals that cooperated with communists and Soviets in taking over Romania but later found himself loving his country and being a nationalist, Ionescu said.

He disagreed with the Soviet domination imposed on Romania which led to conflicts with communist party leaders. As a result, Pătrăşcanu was purged from the party, imprisoned, and executed in 1954.

A desperate need for survival was also exploited in Romania during World War II, Ionescu said. The Romanian society was so anti-communist and anti-Bolshevik that the country’s government struck a deal with Hitler and Germany against the Soviets, which was a terrible situation, he explained, “they found themselves aligning with the devil to fight the devil.”

Romania was a very prosperous and successful monarchy in the 1920s and 1930s and at that time the affluence of the people, the culture, and everything went through the roof, Ionescu said.

During these years the Romanians believed that socialism and communism practiced by their neighbor the Soviet Union would never work in their country, explained Ionescu.

Romanian people loved their king and even after communists took power organized “huge demonstrations, hundreds of thousands of people protesting all over Romania in favor of the king,” Ionescu continued.

The Romanian communist party only had under a thousand members before communism was imposed upon Romania by the Soviet Army, Ionescu said, so “it took force to impose it.”

It took communist rulers in Romania a few years to get rid of private property, it took them even longer to take away lands from the peasants but the war against religion was relentless and lasted up to the point of the revolution in 1989 which overthrew the Romanian communist regime, Ionescu said.

In America today, the education system, the media, and all these trigger points of society have been taken over by Marxism, Ionescu said, America is heading towards that system and these are signs.

“In America, it has to be done in a way where the younger generation is covertly assimilated into that kind of thinking and it has happened for the last few decades,” Ionescu said.

Ionescu advises Americans to exercise their faith in an authentic way, focus more on communities trying to influence people there for good.

Liberals worked every day for the last 50–60 years to conquer step by step almost the whole society including the education system and churches, Ionescu said.

“America has to get back to its belief in God and that’s where it should start a spiritual revival,” Ionescu concluded.