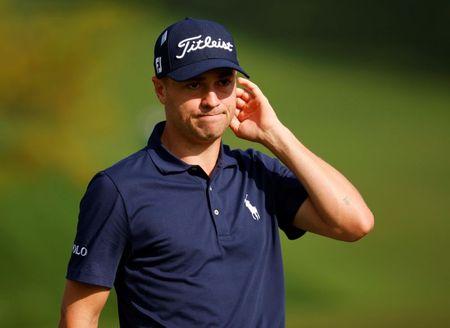 (Reuters) – Justin Thomas has said he will undertake a training program to improve as a person and understands why Ralph Lauren discontinued their sponsorship of him after he used a homophobic slur during the Sentry Tournament of Champions.

Ralph Lauren dropped the 13-time PGA Tour winner and world number three after he was caught by a television microphone uttering the slur after missing a five-foot putt on the fourth hole in the third round of the tournament in Hawaii this month.

Thomas apologised after the incident, saying he made a “terrible judgment call” but Ralph Lauren said in a statement at the time that they were disheartened by his language, which was inconsistent with their values.

“It’s not a word I use, but for some reason it was in there and that’s what I’m trying to figure out… why it was in there,” Thomas told reporters on Wednesday, ahead of the Abu Dhabi Championship.

“Like I said, it’s going to be part of this process and training program, whatever I need to do, not only to prove to myself but to prove to my sponsors and prove to the people who don’t know who I am that is indeed not the person I am.”

Thomas added that he had been in touch with his other sponsors, and that they understood the incident represented an opportunity for him to “grow and become a better person.”

He said he respected Ralph Lauren’s decision to cut ties with him, given the damage he had done to their brand.

“They had to do what they had to do,” Thomas said. “They are a huge global brand, and I have to respect their decision. I wasn’t disappointed, because I put them in a terrible position.

“I just was more upset. I had a great relationship with a lot of people there, and like I said, we would have had the opportunity to do it together. I totally respect their decision and move on from it.”

(Reporting by Simon Jennings in Bengaluru; Editing by Toby Davis)