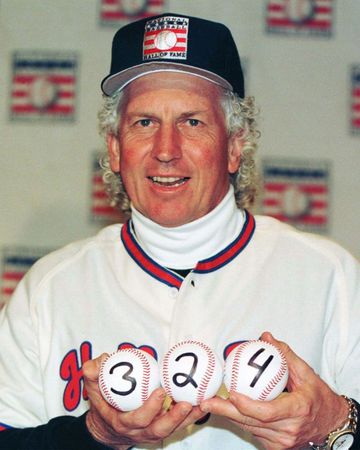 Hall of Fame pitcher and Los Angeles Dodgers great Don Sutton has died at the age of 75, his family announced Tuesday.

Sutton died in his sleep Monday night at his home in Rancho Mirage, Calif., after a long battle with cancer, his son Daron Sutton said on Twitter.

“Don left an indelible mark on the Dodger franchise during his 16 seasons in Los Angeles and many of his records continue to stand to this day,” Dodgers CEO and president Stan Kasten said in a statement. “On behalf of the Dodger organization, we send our condolences to the entire Sutton family, including Don’s wife Mary, his son Daron and his daughters Staci and Jacquie.”

After leading the majors with a 2.20 ERA in 1980, Sutton left the Dodgers in free agency to join the Houston Astros. The Astros traded Sutton, then 37, to the Milwaukee Brewers in a salary dump at the trade deadline in 1982. Sutton went 26-26 in his three years in Milwaukee.

Sutton was traded to the Oakland A’s in December 1984, winning 13 games for the A’s in 1985 before getting moved to the California Angels in a post-trade-deadline waiver deal.

Sutton turned to the broadcast booth in his post-playing days, most notably with the Atlanta Braves, who put him in their Hall of Fame in 2015 after 28 years announcing Braves games.

“We are deeply saddened by the passing of our dear friend, Don Sutton,” the Braves said in a statement. “A generation of Braves fans came to know his voice, as Don spent 28 seasons broadcasting Braves games after a 23-year, Hall-of-Fame major league career with the Dodgers, Astros, Brewers and Angels. Don was as feared on the mound as he was beloved in the booth. A 300-game winner who was a four-time All-Star, Don brought an unmatched knowledge of the game and his sharp wit to his calls. But despite all the success, Don never lost his generous character or humble personality. It is with a heavy heart that we send our condolences and sympathies to Don’s entire family, including his wife Mary, his son Daron and his daughters Staci and Jacquie.”