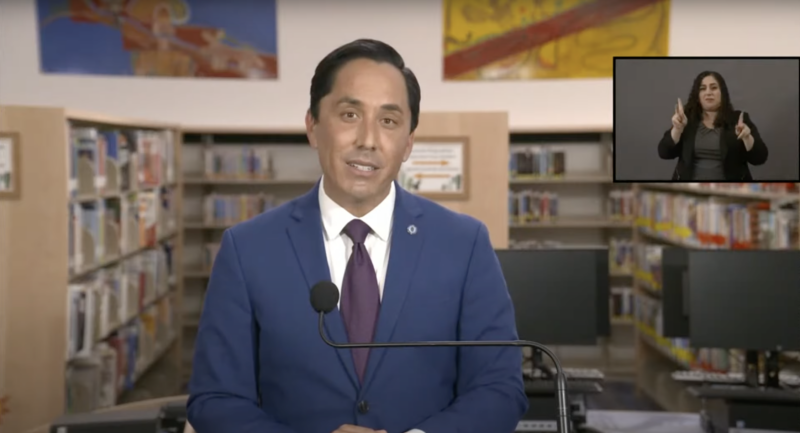 Our Lisa Halverstadt and MacKenzie Elmer broke down seven major pledges and priority areas Gloria emphasized in his big speech.

Among them: putting a serious dent in the city’s homelessness problem, making housing more accessible for low-and middle-income San Diegans, addressing the impending climate crisis and overhauling the city’s transportation – at both the regional and street level.

Gloria was also frank about the challenges he’ll face addressing those priorities, namely a coronavirus pandemic that has ravaged both the lives of residents and business owners and the city’s budget.

As Halverstadt reported earlier this week, the mayor is staring down a $124 million budget deficit for the new fiscal year that begins in July, a reality that will likely force significant cuts and make it more difficult for Gloria to deliver on campaign and State of the City promises.

San Diego Unified officials decided against setting a target date to reopen district schools at their board meeting this week.

Health experts and district officials have also said regular COVID-19 testing for students and staff could allow schools to reopen during a time when community spread is rampant.

The U-T reports that San Diego Unified has established its own program and so far has given 175 tests to students and staff at 10 schools.

New GOP Chair Blasts Dems for Not Unifying the Country

The Central Committee of the Republican Party of San Diego County elected Paula Whitsell to serve as the new chairwoman of the local party Monday. Tony Krvaric had served as chairman for nearly 15 years.

Thursday, Whitsell issued her first statement as chair denouncing the House of Representatives’ vote to impeach President Trump for the second time after he incited a mob to attack Congress. Whitsell wrote that Democrats only pursued the impeachment because of their animosity to the president and the party’s “long program” to damage any critics.

Democrats were joined by 10 Republicans in the impeachment vote.

“We believe that it is time for the nation to heal and for Speaker Pelosi and her House colleagues along with President-elect Biden to bring our divided nation together,” Whitsell wrote.

Whitsell has deleted a tweet she wrote before the Jan. 6 attack on Congress in which she endorsed a statement from Dinesh D’Souza who wrote that any Republican who didn’t vote to overturn the presidential election Jan. 6 would have no future in the Republican Party.

“President Trump had the backs of the American people for 4 years. The least we can do now is stand up for our President! We got your back!” Whitsell had written.

The Morning Report was written by Lisa Halverstadt, and edited by Sara Libby.