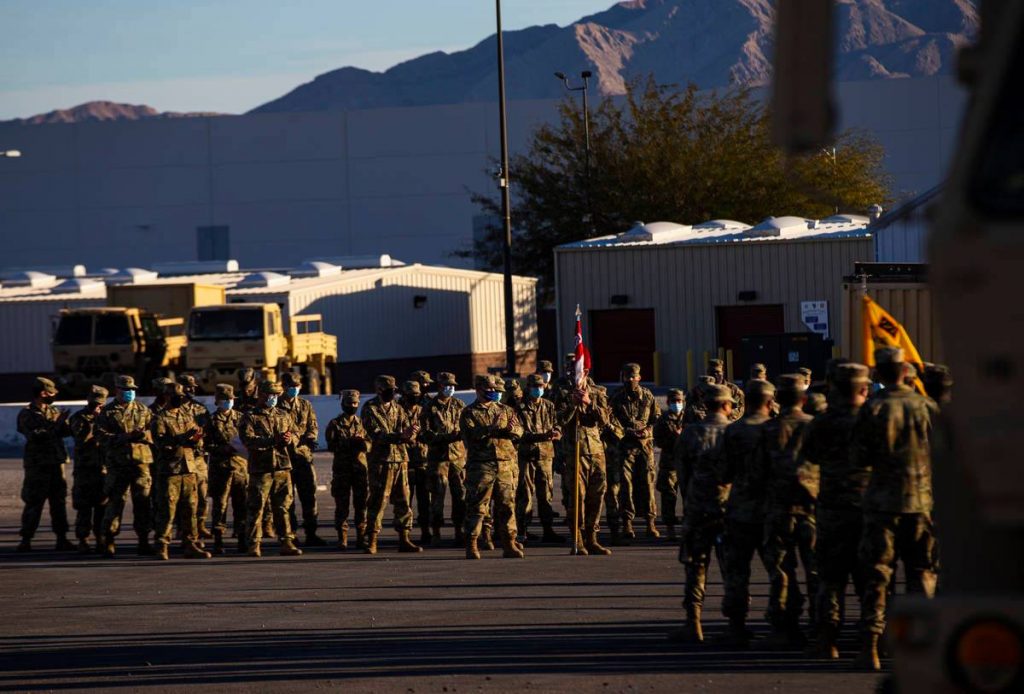 As Thursday afternoon reached its golden hour, nearly 200 members of the Nevada Army Guard stood in formation outside the Clark County Armory as they were briefed before their mission to Washington, D.C.

“This is historic,” said Maj. Gen. Ondra Berry, their adjutant general. “You get a chance to be a part of something that’s never been done before in this country.”

The Army Guardsmen, who will travel to the nation’s capital Friday morning to provide support before and during the Jan. 20 inauguration of President-elect Joe Biden, erupted in applause.

Nevada is joining a total of 22,000 troops from 54 U.S. states and territories that will be in Washington, D.C., by Sunday — more than double the typical number of forces present on Inauguration Day.

“There’s more guardsmen that are going to be in the national capital region than we’ve got in Syria, Afghanistan and Iraq altogether,” Berry said.

Officials say the mission was set up before the violent siege on the Capitol Jan. 6. The insurrection was spurred by supporters of President Donald Trump who believed the November presidential election was fraudulent.

The U.S. Secret Service, U.S. Capitol Police and D.C. Parks and Recreation police had made the request for additional support before and during Biden’s inauguration, National Guard Gen. Daniel Hokanson said in a statement.

The Nevada Guardsmen will provide military personnel and equipment for the inauguration ceremony.

They also will provide law enforcement with security, logistics and communications support, and have undergone extensive riot training to prepare for the mission.

After Jan. 6, additional guardsmen and resources were added to the effort, Berry said. He reminded the guardsmen Thursday that Capitol Police officer Brian Sicknick, who was killed in the riot at the Capitol, was in the New Jersey National Guard.

For young Sgt. Jalyn Todd, it would be her first time at an inauguration, and she said she acknowledged the historical nature of what was to come.

She also said she expects that there will be some conflict, but her job is to be on guard to keep everybody as safe as possible.

“It’s the best thing yet. I feel like it’s going to be a life-changing event, for myself and the American people to see,” she said. “It’s going to be exciting. So, I’m ready.”

At the briefing Thursday, Berry read aloud a letter from the National Guard Joint Chiefs of Staff that called Jan. 6 a “direct assault on the United States Congress, the Capitol building and the Constitutional process.”

Officers also encouraged the guardsmen and their families to stay off social media while on their mission. They told them the sole goal is to protect the Constitution.