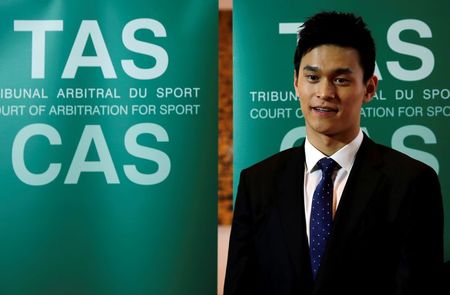 ZURICH (Reuters) – Chinese swimmer Sun Yang did not get an impartial hearing when he was banned for eight years for doping offences as one of the judges had tweeted anti-Chinese messages concerning animal rights, Switzerland’s highest court said on Friday.

The Federal Supreme Court said tweets by the president of the panel of arbitrators at the Court of Arbitration for Sport (CAS) – the Italian Franco Frattini – had exhibited possible bias against Chinese people and their treatment of dogs.

“The Federal Supreme Court therefore considered that the doubts as to the impartiality of the arbitrator were objectively justified,” the Lausanne court said on Friday, giving reasons for its December decision to send the matter back to CAS, which is based in the same city.

Triple Olympic champion Sun was originally banned by CAS last February after it accepted an appeal from the World Anti-Doping Agency (WADA) against a decision by swimming governing body FINA to clear him of wrongdoing for his conduct during a 2018 test.

The swimmer appealed and the Swiss Federal Supreme Court in December upheld his challenge against the CAS Panel “on the grounds of bias of one of the arbitrators of the CAS.”

Giving its reasons on Friday, the court said the CAS arbitrator had tweeted about animal protection issues, without the restraint required of judges, and had repeatedly used violent expressions.

“In his tweets, the arbitrator castigates a Chinese practice of dog slaughter and denounces the consumption of this meat at a local festival in China,” the Federal Supreme Court said.

“Some expressions refer to the skin colour of certain Chinese people he targets,” it added. “In addition, the arbitrator also made the said remarks in tweets after his appointment as president of the panel of arbitrators deciding in the Sun Yang case.”

As a result, the case has now been sent back to CAS, which must hear it again with a different panel of judges.

The sanctions imposed on Sun were automatically lifted after the court’s December decision, CAS said, adding its procedure would resume once a new president of the panel had been appointed.

“Ultimately, a new award will be issued, which could be different from the first one, or similar,” a CAS spokeswoman said.

The decision could potentially clear the way for Sun to compete at this year’s delayed Tokyo Olympics, depending on when the case is heard.

Sun, the reigning world and Olympic champion in 200 metres freestyle, was banned after he and members of his entourage were found to have smashed vials containing blood samples taken at an out-of-competition test in September 2018.

Sun has questioned the credentials and identity of the testers and has constantly proclaimed his innocence.