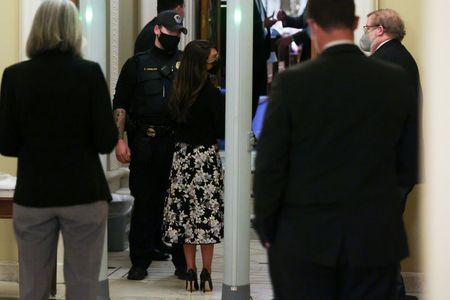 WASHINGTON (Reuters) – U.S House Speaker Nancy Pelosi said on Wednesday she wants fines of up to $10,000 for lawmakers who refuse to be screened for firearms at entrances to the House of Representatives, following the Jan. 6 violent attack on the Capitol by pro-Trump rioters.

Metal detectors were erected at entrances to the House floor on Tuesday evening as members were debating whether Trump should be removed from office over the assault on the Capitol, which sent lawmakers into hiding and left five people dead. Several Republicans were seen going around the detectors or loudly complaining about their use to the Capitol police.

Pelosi announced Wednesday that when the Democratic-majority House returns to session Jan. 21, members will vote on a rule change mandating fines for members who refuse to follow the protocols — $5,000 for the first offense and $10,000 for the second, to be deducted from lawmakers’ salaries.

Pelosi said many House Republicans have “disrespected” the Capitol police “by verbally abusing them and refusing to adhere to basic precautions keeping members of our Congressional community, including the Capitol Police, safe.”

“It is tragic that this step is necessary, but the Chamber of the People’s House must and will be safe,” she said.

Newly elected Representative Lauren Boebert, a Republican who has vowed to carry her Glock pistol when she is at work in the Capitol, was seen setting off the metal detector alarm on Tuesday evening and then refusing to allow her bag to be searched before entering the chamber.

Boebert later tweeted her protest against the rules. “I am legally permitted to carry my firearm in Washington, D.C. and within the Capitol complex,” she wrote.

“Metal detectors outside of the House would not have stopped the violence we saw last week — it’s just another political stunt by Speaker Pelosi,” Boebert said.