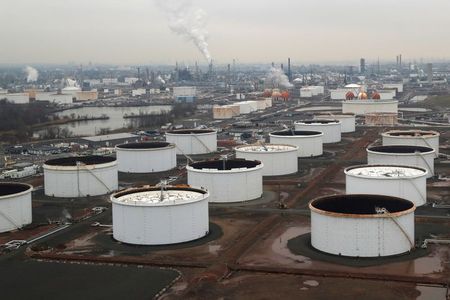 NEW YORK (Reuters) – Oil prices edged higher on Thursday, boosted by a weak dollar and bullish signals from Chinese import data but pressured by renewed worries about global oil demand due to surging coronavirus cases in Europe and new lockdowns in China.

Raising hopes of increased oil demand was a hefty U.S. COVID-19 relief package, which President-elect Joe Biden is due to unveil on Thursday.

Governments across Europe have announced tighter and longer coronavirus lockdowns, with vaccinations not expected to have a significant impact for the next few months.

“The complex remains in pause mode, a development that should not be surprising given the magnitude of the oil price gains that have been developing for some 2-1/2 months,” Jim Ritterbusch, president of Ritterbusch and Associates, said.

“Global oil demand improvement during the next few months may well be intersecting with reduced production as the Saudis initiate their voluntary cuts at a time when U.S. shale producers are showing reluctance in boosting output in response to higher prices.”

The Organization of the Petroleum Exporting Countries left its forecast for world demand unchanged, saying oil use will rise by 5.9 million barrels per day this year to 95.91 million bpd, following a record 9.75 million bpd contraction last year due to the pandemic.

Oil producers face an unprecedented challenge balancing supply and demand as factors including the pace and response to COVID-19 vaccines cloud the outlook, said an official at the International Energy Agency (IEA).

Saudi Arabia, for example, is throttling oil supply to some Asian buyers, refinery and trade sources told Reuters, while Russia plans to ramp up output this year, according to Russian media.

“The Saudi cuts are priced in since last week, even a bit more than was reasonable under market conditions, and a rationalisation of prices was overdue,” said Rystad oil market analyst Bjornar Tonhaugen.

“Seeing COVID-19 infections rise in China by the largest margins in a long time is alarming for the market and, combined with strict ongoing lockdowns in Europe, may affect oil demand much more than initially anticipated in the first quarter.”