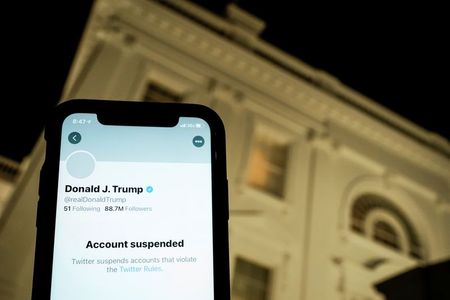 By Kanishka Singh and Katie Paul

(Reuters) – Twitter Inc Chief Executive Jack Dorsey said on Wednesday that banning President Donald Trump from its social media platform after last week’s violence at the U.S. Capitol was the “right decision,” but said it sets a dangerous precedent.

San Francisco-based Twitter last week removed Trump’s account, which had 88 million followers, citing the risk of further violence following the storming of the Capitol by supporters of the president.

“Having to take these actions fragment the public conversation,” Dorsey said on Twitter https://twitter.com/jack/status/1349510769268850690. “They divide us. They limit the potential for clarification, redemption, and learning. And sets a precedent I feel is dangerous: the power an individual or corporation has over a part of the global public conversation.”

The ban drew criticism from some Republicans who said it quelled the president’s right to free speech. German Chancellor Angela Merkel also warned through a spokesman that legislators, not private companies, should decide on potential curbs to free expression.

In his Twitter thread, Dorsey said that while he took no pride in the ban, “Offline harm as a result of online speech is demonstrably real, and what drives our policy and enforcement above all.”

Even so, he added, “While there are clear and obvious exceptions, I feel a ban is a failure of ours ultimately to promote healthy conversation.”

Twitter has introduced a series of measures over the last year like labels, warnings and distribution restrictions to reduce the need for decisions about removing content entirely from the service.

Dorsey has said he believes those measures can promote more fruitful, or “healthy,” conversations online and lessen the impact of bad behavior.

The Twitter CEO added that bans by social media companies on Trump after last week’s violence were emboldened by each other’s actions even though they were not coordinated. But in the long term, the precedent set “will be destructive to the noble purpose and ideals of the open internet,” he said.

Supporters of Trump who has repeatedly made baseless claims challenging Democrat Joe Biden’s victory in the November election, stormed the U.S. Capitol on Wednesday, trying to halt the certification by Congress of Biden’s Electoral College win.

On Wednesday, Trump became the first president in U.S. history to be impeached twice.

(Reporting by Kanishka Singh in Bengaluru and Katie Paul in San Francisco; Editing by Peter Henderson and Leslie Adler)