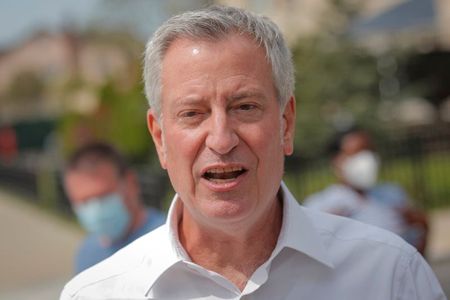 NEW YORK (Reuters) – New York City declared on Wednesday that it will cut business ties with the Trump Organization, and at least two companies made similar moves, citing the storming of the U.S. Capitol last week by a crowd that President Donald Trump had egged on.

Mayor Bill de Blasio, who accused the outgoing president of stirring the crowds, said the move affects three contracts with the company to operate a carousel in Manhattan’s Central Park, skating rinks and a golf course in the Bronx.

“The president incited a rebellion against the United States government that killed five people and threatened to derail the constitutional transfer of power,” de Blasio said in a statement. “The city of New York will not be associated with those unforgivable acts in any shape, way or form.”

Cancelling the golf course contracts could take “a number of months”, while the others could be severed in 25-30 days, the mayor’s office said in a statement.

The contracts are worth about $17 million a year, de Blasio said on MSNBC.

The New York-based Trump Organization did not immediately reply to a request for comment.

On Jan. 6, Trump addressed thousands of supporters, reiterating his unsupported claim that his re-election was stolen. He urged them to march to the Capitol where Congress was affirming President-elect Joe Biden’s victory in the Electoral College.

The crowd quickly overwhelmed Capitol security, with many entering the building and forcing a halt to the proceedings as lawmakers took cover in a secure location. Five people died as a result of the rampage.

Trump’s role in encouraging the crowd also resulted in the targeting of some of his personal banking relationships. A Signature Bank spokeswoman said it would close his checking and money market accounts that held at least $5.1 million, according to public disclosures.

Signature Bank said Trump should resign and added it would not do business with members of Congress who rejected the results of the Electoral College.

Separately, a spokesman for the leading commercial real estate firm Cushman & Wakefield said in an email that it will not longer do business with the Trump Organization.

The firm had served as agent for two high-profile Trump Organization properties in Manhattan, including Trump Tower, the president’s former residence.

Following the Capitol riot, the PGA of America and the R&A both announced they would shun two golf courses owned by the president.

In addition, the New York Times reported on Tuesday that Deutsche Bank DBKGn.DE will not do business in the future with Trump or his companies.