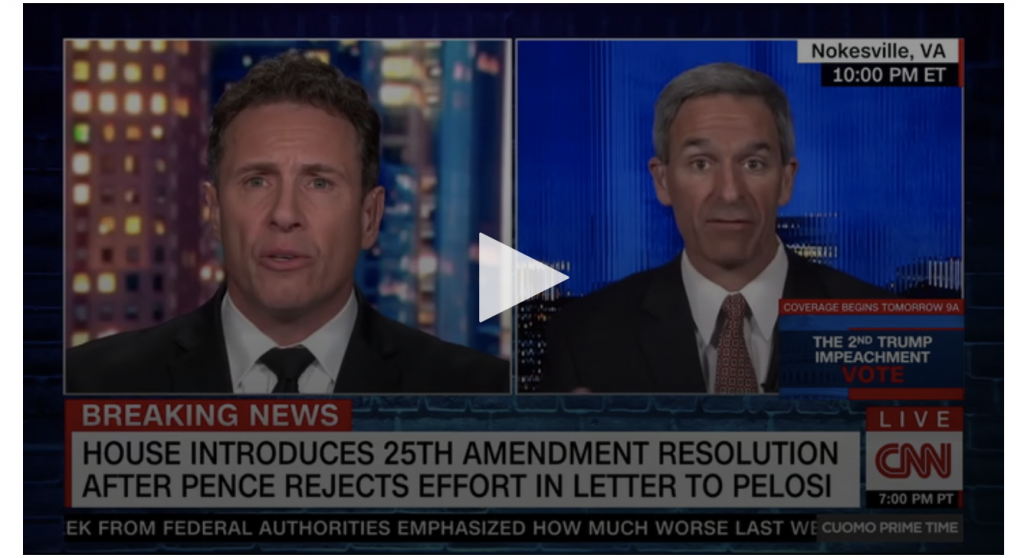 Bring up the summer riots, immigration official Ken Cuccinelli said, “They just haven’t done it at the Capitol. They’ve been doing it all over the country for seven months.”

Cuomo said, “That matters. That matters. Overturning the election is different than being pissed off about being shot by cops.”

During the transition to the next show, anchor Don Lemon said, “That was a very important interview. And listen, I’m glad you mentioned about being shot by cops because you cannot compare. And I’m sick of people comparing. You can’t compare what happened this summer to what happened at the Capitol. It’s two different things.”

He continued, “One is built on people, on racial justice, on criminal justice, right, on reform, on police not beating up – or police treating people of color differently than they do whites. Okay? That is not a lie. Those are facts. Go look at them. What happened at the Capitol was built on a lie perpetrated by the president and the people who support him. So, just on that one merit, if you want to call it, it’s not comparable. That things are not comparable. So they should not be doing it. And stop this whataboutism.”

Cuomo said, “The truth is, as soon as somebody says to you, Don, they are aware of what happened last week – ‘but this summer’ – as soon as the words come out of their mouth, they do not care about what happened last week. They know everything that you’re saying, and I’m saying. They get that it’s not apples to apples. What it is, is a reflection of the truth, of what is happening in this country. Which is there are people who don’t care, who don’t like what was done, who don’t believe that Black people are justified, and it’s why last week happened. And we can get angry too. That is the truth.”