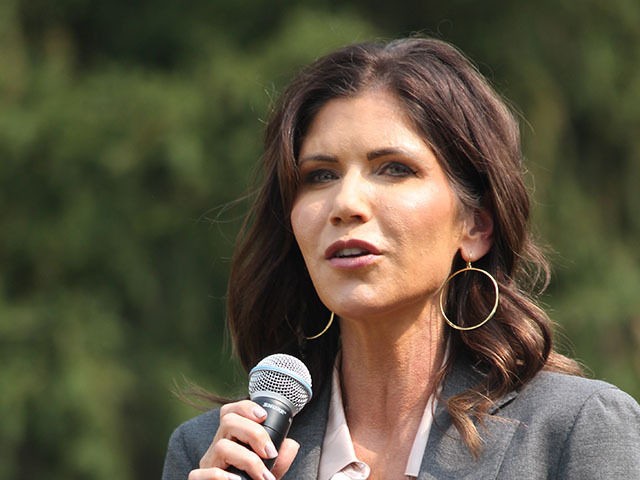 South Dakota Gov. Kristi Noem (R) delivered a message of optimism in her State of the State address Tuesday as she highlighted her administration’s continued hands-off approach to managing coronavirus.

Noem, whose state is one of just a handful that has not imposed statewide stay-at-home orders, mask mandates, or business restrictions, vowed Tuesday afternoon at the South Dakota Capitol in Pierre that her state would remain open as the country grapples with a second wave of coronavirus cases.

“For those who have spent the last nine months shut down or locked up in other states, South Dakota is open,” Noem said in her address. “We have stayed open the entire time, and that’s how we will operate for as long as I am governor.”

The tone of Noem’s address contrasted with that of New York Gov. Andrew Cuomo’s (D) address — delivered on Monday — which focused heavily on the negative impacts of the virus and the undertaking of recovery.

“The truth is, we cannot stay closed until everyone is vaccinated,” Cuomo conceded after about ten months of statewide shutdown measures that have resulted in mass permanent closures of New York’s small businesses. “The economic, psychological, emotional cost would be incredible,” he said.

“We must begin increasing economic activity and using science to do it, making COVID testing and vaccinations available, so that we can reopen restaurants and art spaces and theaters and commercial businesses,” Cuomo said. Despite the crushing mandates, New York remains one of the highest in coronavirus deaths per capita in the country, second only to New Jersey.

After his address, the New York Post published an op-ed headlined “Andrew Cuomo’s sad State of the State speech”:

While South Dakota remained nearly unaffected by the virus through the summer, the state saw a drastic surge in the fall, which pushed the state also near the top of the list in coronavirus deaths per capita.

Noem penned an op-ed in the Wall Street Journal shortly after the worst of the state’s experience with the virus, doubling down on her policy stance and berating her critics for failing to consider individuals’ social and mental well-being and states’ economies.

She cited states with stringent mandates that have taken on enormous economic losses while still seeing some of the country’s worst virus statistics, including New York and New Jersey as well as Illinois.

She wrote in her op-ed:

Even amid a pandemic, public policy ought to be holistic. Daily needs must still be met. People need to eat and keep a roof over their heads. And they still need purpose. That means policy makers cannot have tunnel vision. They must balance public-health concerns with people’s mental and emotional needs, their economic livelihoods and social connections, and liberty, among many other important factors.

During her address, Noem promoted South Dakota’s thriving economy. “We’re in a much stronger financial position than other states across the country. States that shut down their economies are now looking at tax increases or drastic spending cuts to make ends meet,” she said, while adding on social media that “businesses are flocking to South Dakota”:

And businesses are flocking to South Dakota.

“We made different choices than virtually any other state over the past year. … But other states based a lot of their decisions on fear and emotion, and now they’re seeing the results of that,” Noem continued in her speech. “In South Dakota, we do not make policy out of fear. We prepare for the worst but always remain optimistic that the best is yet to come.”

The governor claimed that in 2020, South Dakota served as a haven while many other states were locked down in crisis-mode. “Because South Dakota remained open and didn’t lock down, more Americans from out of state came to enjoy our natural spaces too,” Noem said, adding that Custer State Park surpassed two million visitors for the first time in history.

Seeing the increased interactions with nature in 2020 was a triumph for Noem. “Getting our youth to put down the Xbox and pick up the tackle box has been a priority of mine for many years,” she said.

Noem’s address comes as South Dakota’s number of new daily cases continues to fall, with 181 new cases recorded on January 11, compared with a peak number of 2,138 on November 27, per Worldometer data.

Write to Ashley Oliver at aoliver@breitbart.com.