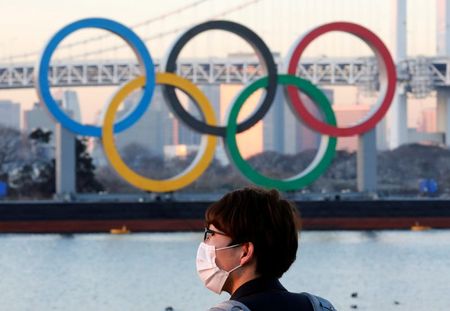 LONDON (Reuters) – Team GB Chef de Mission Mark England said on Wednesday he was confident the Tokyo Olympics would go ahead this year but athletes could expect them to be very different due to the COVID-19 pandemic.

The Games, delayed from 2020 due to the novel coronavirus, are scheduled for July 23 to Aug. 8 but Japan has expanded a state of emergency in the Tokyo area with cases of COVID-19 rising steadily.

“We are hugely confident of the Games going ahead in the summer,” England told Reuters after announcing the selection of shooting hopefuls Kirsty Hegarty, Matt Coward-Holley, Aaron Heading and Seonaid McIntosh.

“We certainly wouldn’t be announcing athletes if that wasn’t the case.”

England, who sits on an International Olympic Committee (IOC) working group, said there would be some “obvious pressure points” but “incredibly comprehensive” health and safety protocols would protect the athletes.

A weekend survey by Japanese public broadcaster NHK showed most locals want to cancel or postpone the Games.

Takeshi Niinami, CEO of beverage giant Suntory Holdings and an economic adviser to Prime Minister Yoshihide Suga, told Reuters he was unsure whether the Olympics could be held as planned.

England said he based his confidence on much more than just “a vibe”.

“The Prime Minister of Japan overnight has commented that the Games will go ahead, the IOC are very confident in their planning for the Games to go ahead,” he said.

“There is nothing that we are hearing today that suggests the Games won’t go ahead. We are full steam ahead, planning to embark on Japan from the middle of July and that is our focus of attention.”

Team GB finished second in the medals table behind the United States at the 2016 Games in Rio de Janeiro and are hoping for an even bigger haul in Tokyo.

England did not expect athletes to have to quarantine on arrival. They would instead have COVID-19 tests prior to departure and on arrival and then go straight to a preparation camp in Yokohama.

Asked about the protocols and social distancing at events, he said competitors could expect to spend less time in the village or attending other events.

“We are considering proposals that would suggest that athletes would only arrive… five to seven days before their competition starts, which is a change of the protocol at previous games, and will be encouraged to leave the Olympic environment up to 48 hours after competition,” he said.

“So a very, very different Games. A Games where we won’t necessarily see athletes supporting their team mates as we have seen in the past.

“But everybody is prepared to work through those (protocols) to ensure that for those athletes in competition it is the safest possible environment that we can prepare for them.”

England said Team GB planned to take 375-380 athletes to Tokyo, with more women than men for the first time, plus support staff.

“What we do know at this stage is there is absolutely no impact on the number of support staff that National Olympic Committees can take,” he added. “There is no reduction in the accredited support staff for the athlete fraternity.

“What we will see I think is an encouragement that the wider delegation, some of our stakeholders and partners, may be discouraged to attend.

“It may well be that the environment, not being allowed to enter the Olympic village or restrictions around that, may well preclude their attendance anyway.”