Post-Trump Republican Party Likely to Continue Most of His Policies, but With Less Bombast 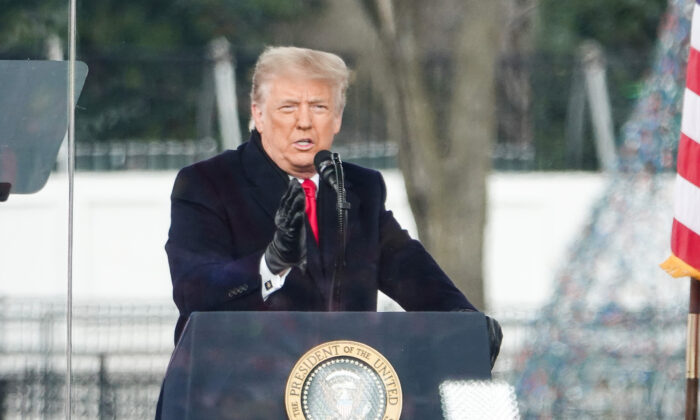 Republicans face some tough questions as they head into the political wilderness with Democrats in control of the White House, Senate and House of Representatives at least until 2023.

The biggest question is what about the man who pulled off a miraculous upset to win the White House in 2016, but who now leaves the Oval Office much as he entered and occupied it: Bombarded with criticism and now confronted with newly empowered Democrats bent on exterminating him and his supporters from public life.

Depending on how President Donald Trump conducts himself in the months ahead, he could remain the dominant figure in the Republican universe, according to Republican office-holders and campaign strategists interviewed by The Epoch Times since the Jan. 6 confrontation at the U.S. Capitol.

“I certainly don’t think the impact of Trump in the Republican Party or in Republican politics is going away just because of everything that has happened,” said Rep. Greg Steube (R-Fla.).

“I just don’t think the President’s influence on the party and politics is going away. I think you’re seeing some people who are trying to distance themselves now from the President, but in six months where are we going to be,” the Florida Republican said.

Steube emphasized that his focus in the next two years will be “on winning the House back, just as it was in the past two years.” Despite Trump’s loss to former Vice-President Joe Biden, Republicans gained 11 seats in the House of Representatives.

Other conservative Republican activists express similar continuing enthusiasm for Trump and some disdain for party leaders who have been less supportive.

Less Government Chairman Seton Motley, for example, said “the GOP’s only hope is to hue closely to the Donald Trump agenda. So, of course, they are steadfastly refusing to do so. It is, as always, exceedingly humorous watching the five percent of the GOP that doesn’t like Trump —who run the party show—blaming all of their failings on the 95 percent of the GOP that likes Trump.”

Brian Darling, former senior counsel to Sen. Rand Paul (R-Ky.) and now head of the Washington, D.C.-based Liberty Government Affairs firm, reminded that Trump may soon be out of the Oval Office, but he will still be around.

“Trump will be an active power in American politics and the Republican Party going forward, no doubt. Before the [Jan. 6 Capitol] riot, he received a record 75 million votes for an incumbent president, and after the turmoil of a second impeachment by the Democratic controlled House, he will still have a loyal following,” Darling said.

Darling was referring to Speaker of the House Nancy Pelosi (D-Calif.) demanding that Trump either be removed from office under the 25th Amendment before his term ends Jan. 20 or face a second impeachment.

The Democrat-led House impeached Trump early last year, but the Republican-led Senate declined to convict the Chief Executive. House Democrats introduced new impeachment charges Monday and there is talk in their ranks of pushing for post-presidency criminal prosecutions.

But Darling cautioned Republicans not to make the mistake of thinking Democrats will be able to do anything they please after Biden is sworn-in Jan. 20.

“We all need to keep in mind that Democrats are going to need strict party discipline to get anything partisan done. They have yet to announce plans on the Senate’s filibuster and they still have a number of Democrats in the House and Senate residing in red districts and states,” Darling told The Epoch Times.

“It is not going to be easy for Democrats to pass anything controversial. Expect the [Rep. Alexandria] Ocasio-Cortez (D-N.Y.) gang to be disappointed from the start. I fully expect the Democratic Socialists to have a miserable two years until they are back in the minority when Republicans take back the House and Senate,” he added.

Taxpayers Protection Alliance (TPA) President David Williams also pointed out that, “It has always been easier to be in opposition than to be in power.  The GOP can now get back to its roots of being fiscally conservative.”

Americans for Tax Reform (ATR) President Grover Norquist, who was a key figure in the Republicans’ 1994 “Contract with America” campaign that restored the party to control the Senate and House for the first time in 40 years, sees a similar path forward for the GOP in 2021.

“Democrats will soon control the House, Senate, and the White House. What should Republicans do? The same thing they did when Clinton in 1992 and Obama in 2008 swept the House, Senate and White House with much greater majorities,” the ATR head told The Epoch Times.

“Offer constructive alternatives to the Democrat lurch to the Left and take back the Congress two years from now,” he said.

Perhaps the most important question regarding the future prospects for the GOP concerns the evangelical and conservative Christian voters who routinely make up a fourth to nearly half of the party’s election-day turnouts.

Among the most influential evangelical leaders is Focus on the Family (FOTF) President Jim Daly, who told The Epoch Times that it is possible there will be a measurable decline in the enthusiasm in coming months for the GOP among such voters.

“It’s possible, I think there could be because of the fervor for Trump and what is perceived as a mis-caricature of justice there, in that Trump gets a different treatment,” Daly said.

“I’m not saying that’s accurate, but I do think when you look at Twitter and the other situations we have right now, there is a building resentment within conservative Christians about that double-standard,” Daly said.

But, he said, “when you look forward, I don’t know that there is an alternative for the conservative Christian community at this stage. I think the Republican Party, based on the platform, based on the policies they’ve pursued—smaller government, religious liberty, pro-life—those are the things that by and large conservative Christians support and we’re not going to find them in the Democratic party.”

Daly said he expects different leadership to rise in Republican ranks, including senators James Lankford of Oklahoma, Marco Rubio of Florida, and Ted Cruz of Texas.

“Effective leadership is the key, how do we pick up the pieces and move forward,” Daly said. “If somebody could be maybe a little less caustic, a little more articulate on the issues, I think Christians will support that individual.”

Daly said he believes the Biden administration to be “a radical four years and I think that, in and of itself, and what Big Tech is doing, and what mainstream media has done, will continue to solidify Christians around the Republican party.”