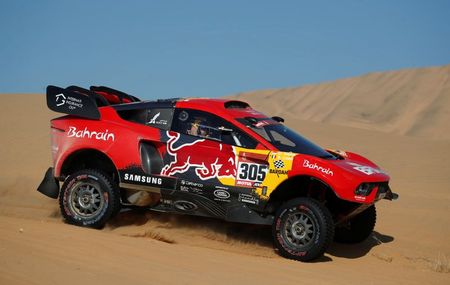 Frenchman Peterhansel, whose 13 wins on two wheels and four have cemented his nickname of ‘Mr Dakar’, leads defending champion Sainz by six minutes and 37 seconds in the car category.

Al-Attiyah won the mainly sandy 457km stage from Bisha to Wadi ad-Dawasir to move up to third overall, more than nine minutes off the lead, from 10th.

“Yesterday we lost a lot of time because we opened the way and it was not really good for us and we didn’t take risks. But today we went flat out and everything is working very, very well,” said the Toyota driver.

Peterhansel was second on the stage, more than two and a half minutes behind.

“This morning there was a little, or rather a lot, of stress because it was the first dunes, but also the car was full of diesel which meant it was really heavy. So, the priority was not to get stuck,” he said.

The 58-year-old Spaniard finished the stage third fastest in his X-Raid Mini JCW Buggy but dropped to second overall.

Nine-times world rally champion Sebastian Loeb was sixth fastest on the stage, an improvement after punctures and errors on Sunday.

In the motorcycle category, Spaniard Joan Barreda took over at the front from Australian KTM rider Toby Price, who dropped to 15th. The stage win was Barreda’s 25th in Dakar competition.

His Honda team mate and defending champion Ricky Brabec of the United States moved up to second overall.