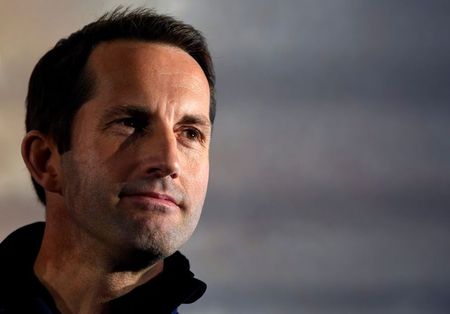 (Reuters) – INEOS Team UK skipper Ben Ainslie said testing has shown the second generation yacht has a “serious issue” in light winds, which could derail their chances of winning the America’s Cup.

The AC75 foiling monohull, named ‘Britannia’, was launched in October and has one significant difference from the British team’s first generation boat — the addition of a bustle keel.

The bustle is supposed to help reduce resistance from waves and help lift the boat out of the water and then reduce air resistance when it is foiling.

“I won’t beat around the bush, it’s a serious issue,” Ainslie told the Times https://www.thetimes.co.uk/edition/sport/sir-ben-ainslie-fears-lack-of-speed-in-light-winds-will-hurt-ineos-americas-cup-chances-nwz9rc9lh. “Ourselves and the American team (American Magic) are not as quick in terms of getting out of the water onto the foils in lighter airs.”

INEOS have already used their allocation of three sets of foil designs and can make no further big upgrades to their boat.

“The challenge is trying to work out whether we just set the boat up slightly differently or whether we use a different technique in how we sail the boat,” Ainslie added.

“That’s what we are trying to work out, but there’s nothing that’s obviously wrong — for example the hull or the mainsail — so we’ve got to go through it bit by bit and work it out.”

Ainslie is hoping INEOS can solve the problem before the challenger series, which runs from Jan. 15-Feb. 22 and determines which team meets defenders Team New Zealand for the America’s Cup from March 6.

“I will never give up or quit and nobody in this team will ever do that,” Ainslie said. “If one team can turn this around, I think it’s this team.”

(Reporting by Simon Jennings in Bengaluru; Editing by Peter Rutherford)