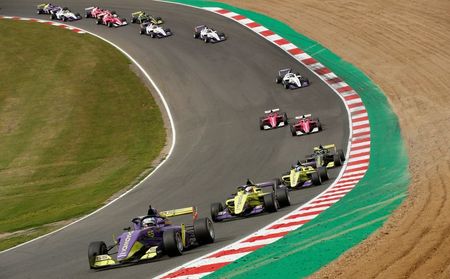 LONDON (Reuters) – The all-female W Series will start its eight race 2021 season at France’s Le Castellet circuit in June and end in Mexico City in October as part of its new role supporting Formula One, organisers said on Tuesday.

The single sex series started in 2019 with the aim of helping women progress up the motorsport ladder and eventually break into Formula One where no female has raced in 44 years.

It shelved activities this year due to the COVID-19 pandemic.

Six of the races provisionally scheduled are in Europe before the final two rounds at Austin’s U.S. Grand Prix circuit and Mexico’s Autodromo Hermanos Rodriguez.

The European races accompany grands prix in France, Austria, Britain, Hungary, Belgium and the Netherlands, which is returning to the F1 calendar with a race at Zandvoort for the first time since 1985.

“W Series’ mission will always be to further the interests and prospects of female racing drivers, and to inspire girls and women everywhere,” said founder and chief executive Catherine Bond Muir in a statement.

“Our 2021 race schedule in partnership with Formula One will significantly increase our global reach, impact and influence by placing W Series on motor racing’s greatest stage and taking us to new audiences and territories.”

W Series has yet to confirm who will be driving.

Britain’s Jamie Chadwick won the 2019 title, with its prize of $500,000, but has committed to the new Extreme E off-road all-electric SUV series due to start up next year with five races.

Two of the provisional W Series race dates — Belgium on Aug. 28 and the United States on Oct. 23 — clash with those published by Extreme E for races in Greenland’s Arctic and Brazilian Amazon.