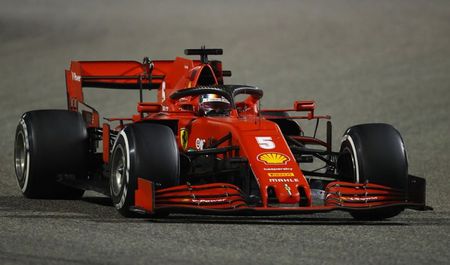 The 33-year-old German is joining from Ferrari, where he has been out of sorts of late, to what will be the Aston Martin team in 2021 in a move that has pushed on-form Mexican Perez out of the door.

Perez, three years younger and in the form of his life, is fourth in the drivers’ standings after his first F1 win. He has no seat lined up for next year, however.

Brawn, in a column on the formula1.com website, repeated his view that it will be a ‘tragedy’ if Perez is not racing next season.

“The team must be thinking about the decisions they have made, losing him when he’s driving so well,” said the Briton.

“His replacement Sebastian Vettel I’m sure will come back stronger, as he’s in a bit of a trough at the moment, but Checo (Perez) is a guaranteed deal. So that’ll be interesting to see how that develops.

“In a way, Seb has some fairly big shoes to fill now, even if he’s a world champion.”

Racing Point’s other driver is Lance Stroll, son of the Canadian billionaire owner Lawrence Stroll and in no danger of losing his seat.

Brawn also hailed Briton George Russell, who stood in at Mercedes for Lewis Hamilton while the seven-times world champion was recovering from COVID-19, for an exceptional performance.

“I always thought he was a good Grand Prix driver,” said the former Mercedes team boss. “But you never know if he has that last little bit of speed that marks you out as a brilliant driver.

“George demonstrated that he has got that extra little bit – and a star is born. There is now no doubt that he’s F1 world champion material.”